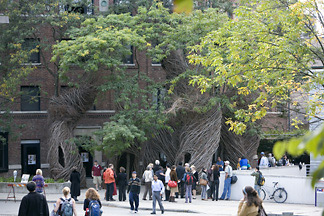 Jason Koski/University Photography
Artist Patrick Dougherty's Collegetown sculpture has been erected over the past several weeks. Above, people check out the finished work during the opening reception Sept. 21. 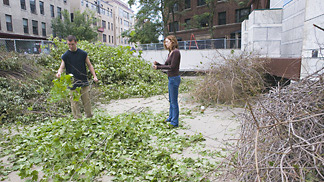 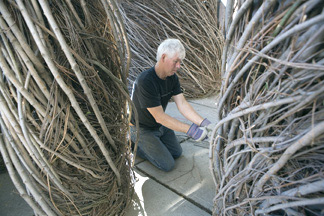 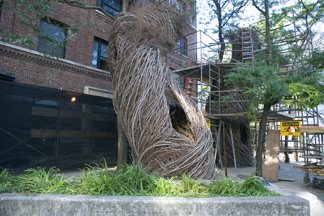 The sculptures -- made from hundreds of saplings and branches stripped of their leaves -- grew slowly over three weeks, winding around six trees in a barely noticed plaza between the Schwartz Center and Sheldon Court in Collegetown.

Artist Patrick Dougherty, with assistance from several Cornell students and Ithaca residents, wove the saplings into an outdoor arboreal art installation that opened to the public Sept. 21. Visitors stepped into the hollow, elongated and twisted igloos and peered out of them at each other.

Dougherty and his assistants waited until the installation was complete before deciding on the title: "Half a Dozen of the Other."

The aim of the installation, he said, was to transform the space and allow people to interact with the sculptures and to see the public space in a completely new way. "The day that it's finished, when you get your scaffolding down … people come flooding into it and enjoy it. It's really nice," Dougherty said.

"This is the most important piece of contemporary public art that's commissioned, that's site specific and that's temporary, in my period here as a student or as a faculty member, which is basically 20 of the last 27 years," said Milton Curry, associate professor of architecture and director of the Cornell Council for the Arts (CCA). "[It shows] how temporary, site-specific art can change your perceptions of a place."

"The work was well executed, [especially considering] its relationship with the site as a critical venue, where Cornell begins to engage in some dynamic dialogue with the city," said project curator Amaechi Okigbo, a CCA member and associate professor of landscape architecture. "One of the unique things, too, is that despite the fact that this particular intersection is one of the most urban of areas in the city of Ithaca, it is also a confluence of cultural exchange. I couldn't think of a more appropriate site where public art begins to manifest itself, not only outside, but also within the Schwartz Center as a venue for artistic and creative discourse."

The installation will stay up for a year. "Maybe this will be the start of having a number of different uses of this space … where people are challenged to use this space and present other kinds of ideas," Dougherty said.

He is the first of five artists to participate in CCA's "5 Years/5 Contemporary Installations" program. The project is sponsored by CCA, http://www.arts.cornell.edu/cca, with support from the Department of Theatre, Film and Dance, Hilton Garden Inn and Stella's Cafe/Olivia Restaurant.