OMA
An artist's rendering of a view of Milstein Hall, connecting Sibley and Rand halls.

Milstein Hall, the newest building of Cornell's College of Architecture, Art and Planning (AAP), will be many things for many people: a space that is social, flexible, improvisational and adaptable. Not to mention big, beautiful and modern. 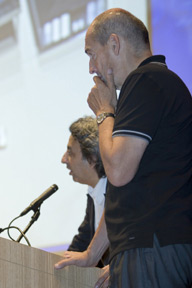 L. France/University Photography
Mohsen Mostafavi, dean of the College of Architecture, Art and Planning, introduces Rem Koolhaas at the Sept. 19 unveiling of the Milstein Hall design.

The plans for the building were unveiled Sept. 19 in Bailey Hall by famed architect Rem Koolhaas and his associates in the Office for Metropolitan Architecture (OMA), based in Rotterdam, the Netherlands. The firm was selected in January to design the long-delayed project. The 43,000-square-foot building has an approved budget of $40 million. Groundbreaking is expected in early 2007 and completion in 2009.

Milstein Hall, the first building Koolhaas has designed for fellow architects, will be a vital campus link for Cornell and a major component of the college's educational goals. Koolhaas called Milstein "a miracle box -- which at first sight seems very straightforward."

The wafer-shaped modernist structure will serve as a unifying platform for the different disciplines within the college and foster community and collaboration across departmental boundaries.

"Part of the new building will have a lecture hall -- we've been waiting for that for eight years," Mostafavi said. The renovation of Olive Tjaden Hall in 1996-97 replaced a lecture hall with exhibition spaces, he said.

Milstein Hall will sit squarely on the northeast corner of the Arts Quad and will unite the AAP campus, connecting East Sibley Hall with the west side of Rand Hall. Its top level, or upper plate, will extend north over University Avenue toward the Foundry, which houses sculpture studios. A portion of Milstein will overlook the Arts Quad along the east side of Sibley.

The covered area beneath the steel structure also will be flexible, for use as a social or exhibition space or project construction area, with the capability to be temporarily enclosed for all-weather use. 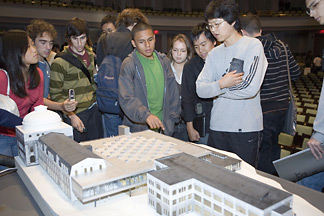 Lindsay France/University Photography
Students get a close-up view of OMA's model, which shows how Milstein Hall will be integrated with Sibley and Rand halls.

"We all know about the climate of this place, so we thought we should have a variety of external spaces," said OMA associate Shohei Shigematsu.

The proposed Sibley Plaza, on the site of the current Sibley parking lot, will emerge from beneath Milstein as a through-line from AAP to the Johnson Museum, and allow for future expansion behind Sibley and Tjaden halls.

The building will have three levels -- the first two, at and below ground level, will accommodate a 282-seat auditorium and public spaces for exhibitions and other programs.

The upper plate -- essentially one large space for interaction -- will house the Fine Arts Library, computer labs, studios and critique space, all suffused with natural light from surrounding floor-to-ceiling windows and a grid of skylights.

The roof of the ground floor, or lower plate, will rise to form a "bump" that defines the slope of the auditorium and create a central lobby and access to the upper plate. Koolhaas described this feature as part of "the hidden depth of the building." 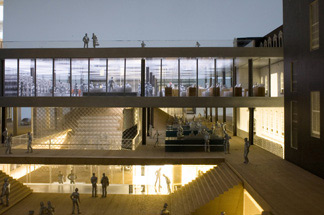 Copyright © Cornell University
A new plaza is formed next to Milstein Hall, creating a direct connection to the building, as well as the lower level of Sibley Hall and the Green Dragon Cafe.

Mostafavi introduced Koolhaas, 61, to the audience of about 700 as "a visiting research student in the 1970s" -- he lived on Eddy Street while working on his book "Delirious New York," on his way to becoming one of the world's leading architects.

In presenting the design, Koolhaas said Milstein Hall needed to be an enhancement and not just an addition to the campus.

"What needed to be done was to undo this scandalous neglect and the introduction of a war zone behind Sibley [showing a slide of the construction staging area there, drawing laughter from the audience], and reconnect the campus with its most beautiful feature -- the gorge," he said. "We had to create a building where the gorge and its landscape could be appreciated."

"We've been waiting a long time, anticipating this," said first-year architecture student Michael Lee during a presentation to students by OMA associates. "They've been trying to do this for so many years. It's exciting to be part of the process -- especially to have someone like Rem Koolhaas involved -- and we get to see it being built for the next three years."

The OMA team is presenting the plans to alumni and the media Sept. 20 in Manhattan at AAP's loft space on W. 17th Street.