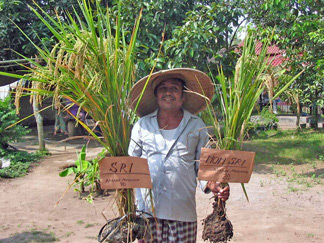 Photo courtesy of Shuichi Sato, Nippon Koei
A farmer in Lombok, Indonesia, holds two rice plants of same variety. The plant on the left was grown with SRI methods and the one on the right with conventional methods.

While many researchers explore genetic improvements to raise rice yields, a Cornell institute has shown that such yields can be greatly increased through simple changes in how rice plants, soil, water and nutrients are managed. The rice-growing method has drawn attention worldwide, and Cornell is now on the short list of a $1 million sustainability prize.

The attention is fitting. Developed in Madagascar over 20 years ago, the method is now used by farmers in 24 countries. It requires less water and fertilizer and fewer seeds, but increases yields by 50 percent to 100 percent or more.

The Cornell International Institute for Food, Agriculture and Development (CIIFAD, pronounced "see-fad") has been responsible for disseminating the method -- called the System of Rice Intensification (SRI) -- free via e-mail and the Internet to farmers throughout the developing world.

In a good example of the global reach of Cornell's land-grant mission, CIIFAD has been evaluating and promoting the SRI since 2000, working with nongovernmental organizations, universities, governments and others to make this environmentally friendly innovation widely available. Already, about 300,000 of the world's poorest farmers in Africa, Asia and Latin America are using the system in some form, often doubling their income.

CIIFAD has just been selected as one of 10 finalists, and the only one from the United States, for the 2006 Alcan Prize for Sustainability, worth $1 million. The prize, which this year brought 200 entries, is awarded by the aluminum and packaging products company to highlight innovative sustainability practices that have social, economic and environmental benefits.

"The SRI system itself is very simple, but it changes the things farmers have done for thousands of years," said Norman Uphoff, Cornell professor of government and international agriculture and former CIIFAD director, now leader of the institute's Sustainable Rice Systems program.

Results of using the system can be dramatic. In Cambodia, the SRI has spread like wildfire. The system began in the country five years ago with only 28 farmers, but as of March 2006, 55,000 farming families were practicing the SRI in 1,350 villages in 14 provinces.

In Indonesia, the Japanese consulting firm Nippon Koei looked at 1,849 on-farm comparison trials over three years and found average yield increases of 84 percent using 40 percent less water and with 25 percent lower costs (fertilizer use was cut in half). And farmers increased their net income by five times.

In Andhra Pradesh state in India, where 40,000 hectares were farmed using the SRI methods this year, the governor has requested that villages in the state set up demonstration plots. The Worldwide Fund for Nature in India has begun promoting the SRI because of its benign effects on the environment and its benefits for people. Farmers in Bangladesh, China, Cuba, Madagascar, Myanmar, Nepal, the Philippines and Sierra Leone are also gaining interest in the rice-growing system.

Conventional rice farmers typically transplant three- to four-week-old seedlings in clumps of three to six seedlings, putting them in flooded fields. The SRI starts with careful transplanting of eight- to 12-day-old seedlings into muddy, but not engulfed, plots. By eliminating continuous flooding of paddy fields, farmers give roots more oxygen and less water (a limiting resource in many countries). Wide spacing between plants provides more room for roots and canopies to grow. Adding such organic matter as compost to the soil maintains greater abundance and diversity of soil organisms, which symbiotically support plant growth.

"Rice is the most widely consumed cereal in the world," said Uphoff. "It should not be regarded just as a source of calories; it comes in many colors and shapes with attractive differences in texture, taste and other qualities. Locally one can buy wonderful purple rice from China and red rice from Bhutan." He added that since the SRI improves productivity of any rice variety, the system should promote greater rice biodiversity among farmers, including more nutritious indigenous varieties.

The SRI was developed by Henri de Laulanié, S.J., a Frenchman who went to Madagascar in 1961 and worked for the next 34 years to improve Malagasy agricultural systems, especially rice production.