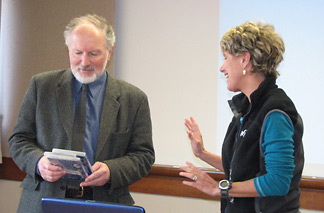 Start with the backdrop of the World Cup, replayed on a giant screen in the Space Sciences Building.

Mix in old friends, many from the 1970s, speaking in English, Spanish and Italian. Add stories of grad school escapades, marathon-observing sessions at the Arecibo Observatory in Puerto Rico and near-death experiences with Chilean firing squads. Provide plenty of prosciutto, salami and Diet Pepsi (complete with the best wishes of the PepsiCo CEO). And structure the event around talks on cosmology and evermore powerful (and gigantic) telescopes.

The symposium's early talks focused on observational cosmology in the age of the Arecibo Legacy Fast ALFA Survey (ALFALFA), an ongoing collaboration of hundreds of students and researchers worldwide, led by Giovanelli and his wife, Martha Haynes, Cornell's Goldwin Smith Professor of Astronomy.

ALFALFA is expected to detect 20,000 galaxies out to a distance of 750 million light years over its five- to six-year course. The survey has the potential to discover galaxies invisible in the optical spectrum, possibly offering new clues about the nature of dark matter and the evolution of galaxies throughout the universe.

The later talks addressed cosmology's future, particularly the construction of the Cornell Caltech Atacama Telescope (CCAT), a proposed project led by Giovanelli to build a telescope with unprecedented sensitivity in the high desert of northern Chile.

CCAT's chosen site in the Atacama Desert will give it unique ability to detect light in the submillimeter, or far infrared, range of the electromagnetic spectrum -- wavelengths that are normally absorbed by water vapor and hard to detect from almost any other place on Earth. Observations from CCAT could lead to breakthroughs in the study of the origin of galaxies and the early evolution of the universe.

Cornell signed an agreement with the California Institute of Technology (Caltech) in 2004 to collaborate on the project, with financial help from retired businessman Fred Young, Cornell Class of 1964. Planners hope to begin construction in 2007 and to see first light from the telescope in 2012.

Bob Brown, director of the National Astronomy and Ionosphere Center (a Cornell center that operates the Arecibo Observatory for the National Science Foundation), said Giovanelli has been a key figure in Arecibo's scientific successes -- and he is looking forward to new discoveries with CCAT.

"[Giovanelli] has gotten the most out of Arecibo," Brown said. "[But] Riccardo had dreams beyond Arecibo. CCAT is an idea which has captured people's imagination. It'll have a big effect on the field. CCAT is just a cosmologist's dream."

CCAT collaborators were among the symposium's speakers, as were students from the present and the past -- including Leslie Hunt, Giovanelli's first student (at Arecibo in 1978; now at the Osservatorio Astrofisico di Arcetri in Florence, Italy).

"It's a wonderful experience, seeing the students come back much more mature," Giovanelli said. "The fact that so many came -- I am very flattered."

But as for the stories and the praise ... don't believe a word of it, he said.