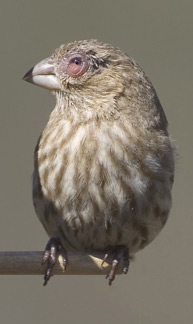 The bacterium Mycoplasma gallisepticum jumped species from chickens to house finches in 1994. Though the pathogen (called a mycoplasma because it is among a group of small, parasitic bacteria that cause diseases) causes a nonfatal respiratory infection in chickens and poses no threat to humans, it causes severe conjunctivitis in house finches, making them less mobile and easier to prey upon. The disease rapidly spread throughout the house finch's eastern range and, more recently, has established itself in the West.

The highly contagious disease has caused house finch populations to decline by half within three years, according to studies. Because the disease is readily visible in the house finch's eyes, thousands of citizen scientists nationwide associated with the Cornell Lab of Ornithology's House Finch Disease Survey have helped track its spread.

Furthermore, because the disease bears similarities with avian influenza and AIDS -- in that all involve transmission via direct contact, a highly mobile host and zoonosis (where the pathogen jumps species) -- the researchers hope these mycoplasma studies shed light on how other diseases spread.

The award follows an earlier grant of almost $2.5 million for research on house finches and M. gallisepticum, headed by André Dhondt, the Edwin H. Morgens Professor of Ornithology in the Department of Ecology and Evolutionary Biology and director of Bird Population Studies at the Cornell Lab of Ornithology. The grants are from the "Ecology of Infectious Diseases Program," a joint NSF, National Institutes of Health and U.S. Geological Survey program designed to study ecology and infectious diseases.

"The first grant allowed us to figure out how the system [behind this epidemic] works, what happens to infected birds both in the wild and in controlled experimental conditions and to develop mathematical models [to look at how the disease spreads]," said Dhondt.

The researchers found that by 1997 the house finch epidemic had expanded throughout the bird's eastern range, from the East Coast all the way to the edge of the Great Plains, from eastern Texas up through eastern North Dakota. By 2002, it had spread west to Montana.

While the disease spread quickly and virulently in the East, the researchers have found that it spreads more slowly in the West, with a smaller proportion of birds affected.

"Part of this new grant is to figure out why," said Dhondt. While house finches are native to the western United States, they were introduced in the East, which may contribute to the eastern birds' susceptibility to the disease. Other unknown factors include how climate impacts disease spread, what other species might carry and spread the disease but not show symptoms (called reservoir species) and details of how the disease is transmitted.

"It has been an unique opportunity to study a new disease as it emerged and watch it spread through the continent," said Dhondt. Five other finch species are also known to develop conjunctivitis from the bacterium.

The team studying the disease includes researchers from Princeton, North Carolina State and Virginia Tech universities. Other Cornell principal investigators are Irby Lovette (also in the Department of Ecology and Evolutionary Biology) and Wesley Hochachka, both of the Cornell Lab of Ornithology; Evan Cooch of the Department of Natural Resources; and avian virologist and immunologist Ton Schat from Cornell's College of Veterinary Medicine.