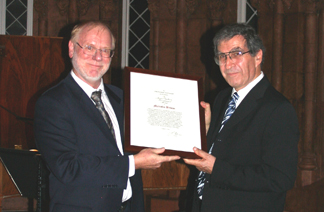 Provided by the Smithsonian Institution
Malcolm Bilson, right, and Gary Sturm, chair of the Division of Music, Sports and Entertainment at the National Museum of American History, hold the award certificate for the James Smithson Bicentennial Medal, awarded to Bilson Oct. 8 in Washington, D.C.

Bilson, professor emeritus of music at Cornell, was awarded the James Smithson Bicentennial Medal Oct. 8 at the Smithsonian Institution in Washington, D.C., for his "extraordinary lifetime achievements" as "a pioneer in the performance of period instruments and chamber music in general."

The medal, first awarded in 1965, is given to those who have made distinguished contributions to the advancement of areas of interest to the Smithsonian.

Bilson was presented the medal by Brent D. Glass, director of the National Museum of American History, during a concert at the Smithsonian by Bilson with the Smithsonian Chamber Music Society.

"Playing one of the first copies of the Smithsonian's 1789 Louis Dulcken fortepiano, he made recordings that broke new ground in the presentation of classical music and drew attention to the Smithsonian's collections of musical instruments," Bilson's award certificate says. "He gained worldwide fame as the soloist in the first recording of all twenty-seven Mozart piano concerti using period instruments. He also has been a frequent performer with the Chamber Music Society."