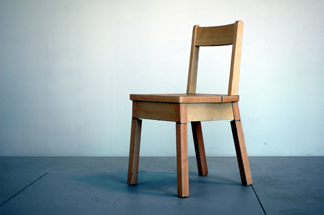 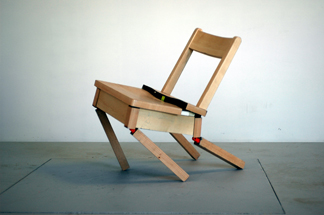 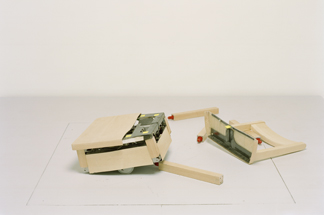 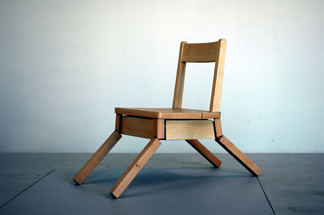 Photos provided by Raffaello D'Andrea
"The Robotic Chair" is shown in various stages of collapse and recovery. The chair, which has created an Internet buzz, is an art exhibit created by Associate Professor Raffaello D'Andrea, his former student and two artists. The chair falls apart and reassembles itself autonomously.

A seemingly simple, sturdy, wood-veneer chair has become an online video hit. With its "brain" in its seat, the chair collapses into a disheveled, disconnected heap; its legs then slowly find each corner of the base, connect back together and eventually, the chair stands upright.

The next breakthrough in artificial intelligence?

"It has no utilitarian value," D'Andrea said. "It is an art piece."

The artistic brainchild of Canadian artist Max Dean, the chair is currently on tour at art exhibits around the world, most recently at the Ars Electronica show in Austria.

The creation of the chair would have been artistic achievement enough, except that the robot's rapid rise to fame over the Internet has created an unexpected buzz. A recent spot that aired on the Discovery Channel also helped surge the chair into an international spotlight.

The hype began, D'Andrea said, right after he spoke about the chair at a Cornell-sponsored event in Silicon Valley in May. He and the rest of the chair team had just finished building a working prototype.

"Word just got out, and somebody decided to put the video on YouTube," said D'Andrea, who is currently on a year's leave from Cornell, working on a startup company he helped found that employs robotic technology.

The Internet home video hub YouTube, which Google is planning to buy for $1.6 billion, has received more than 80,000 download requests for the video of the Robotic Chair, and varying user comments.

"It's cool, however it doesn't really have a point :P," one viewer wrote.

"Are you Kidding Me? Yes it does have a point! They can use this technology to make robots that can be regenerative if destroyed," another viewer replied.

"The Robotic Chair" isn't the first engineering/art collaboration D'Andrea has worked on with Dean. In 2001 a nondescript robotic table that followed people around was the focus of the pair's artistic sensibilities. The table was exhibited at the Venice Biennale and later purchased by the National Gallery of Canada.

As system architect for the chair, D'Andrea figured out how the robot, which involves 14 motors, two gearboxes and many other parts, would accomplish the task of autonomous self-assembly. Donovan and Lowe built the robot, while D'Andrea outlined the engineering specifications and wrote the algorithms that bring the chair to life. The robot uses a sophisticated algorithm to know how to find its component pieces and build itself back up. It communicates with a computer, which sends commands to the chair's "brain" in the seat so it knows which pieces it needs next.

"Some people thought it was a hoax, or fabricated or computer animation," D'Andrea said. "Others thought it was remote-controlled. The reality of it is, it's not. It's a self-contained system that does what it does."

In November, the chair will go on exhibit in New York City, then go to the art show ARCO in Madrid, Spain, and to other exhibits around the world. Eventually, the chair will be sold to a gallery or a collector, D'Andrea said.

Dean says many people value the chair for the part of themselves they see in it.

"It's continually reassembling itself," he said. "Somewhat like what we do in our own lives. We fall apart and put ourselves back together."