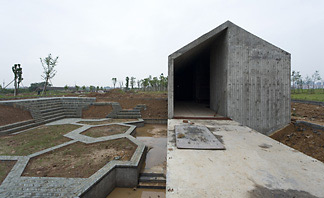 Copyright Iwan Baan
The Archaeological Archives pavilion designed by Ai Weiwei in the Jinhua Architecture Park in China. It is one of 17 functional park buildings designed by architects from North America, Asia and Europe.

As one of China's leading contemporary artists, Ai Weiwei has challenged his country's political authority and literally destroyed its cultural traditions. As an architect, he has had a key role in designing one of the most strikingly visible symbols of contemporary China -- the stadium now rising for the 2008 Beijing Olympics.

"Most people look at his work as social critique and political statement," said Xiaowen Chen, visiting associate professor of art at Cornell, in his introduction. "But to me, his work is both statement and playful event. He's a troublemaker, but he never gets caught. His work shows us anything goes, anything is possible."

The son of a poet exiled during the Cultural Revolution, Weiwei lived in New York from 1981 to 1993, during which time he studied at Parsons School of Design and fell under the 1920s influence of Marcel Duchamp and Dadaism. His early works include a violin with a shovel handle and a profile of Duchamp made from a coat hanger.

After returning to China, Weiwei applied Duchamp's ready-mades and other Western contemporary art concepts to Chinese cultural artifacts, from old pottery to bicycles.

"In China, the art world was quite depressed after Tiananmen Square," he said. His works from 1993 to 1997 indicate his reaction.

Photographs depict the artist smashing a 2,000-year-old Han Dynasty urn on the pavement and decorating another urn with a hand-painted Coca-Cola logo. He took apart and reconstructed at odd angles several examples of antique 14th-century furniture of the Ming and Qu dynasties -- "the highest art form of the time," he said. He dipped dozens of Neolithic vases into buckets of brightly colored paint, "so I can show them in contemporary museums, where there is much better lighting."

He went on to reclaim fragments of Buddhist sculpture in "Feet" (2003) and to make such painstakingly constructed large-scale objects as a room-filling chandelier and maps of China crafted from layers of cotton, 143 interlocking pieces of solid wood and carefully joined sections of scrap lumber.

Weiwei's career as an architect began in 1999 when he built his combination studio, home and exhibition space in Beijing. Since then he has designed several buildings, interiors and public installations -- notably, the geometric masonry landscaping of the Jinhua Riverbank Park (2002-04), a key component to future development of the area. Weiwei also designed the Jinhua Architecture Park, with 17 functional pavilions by architects from China, Germany, Switzerland, Mexico, the United States and Japan.

Weiwei was hired by Swiss architects Herzog & de Meuron to consult on the firm's proposal for Beijing's National Stadium for the 2008 Olympics, guided by a "China Then and Now" theme. His bird's-nest shape won the design competition in 2003.

"To design a stadium requires as much passion as to design a toilet seat," said Weiwei, 49, who also is a curator, publisher and art critic, and whose Fake Design studio welcomes students from all over the world.

"It's very important to use all possible means to express your ideas," he told Cornell students. "I try not to guide myself -- I try to, day to day, accept all the opportunities and to make a mark."

Weiwei's talk was sponsored by the College of Architecture, Art and Planning, which also held an event with Weiwei and Polish artist Krzysztof Wodiczko in New York City Nov. 3.