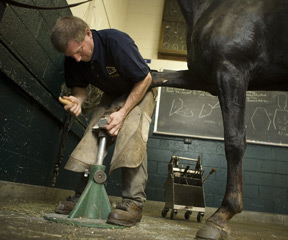 Jason Koski/University Photography
Michael Wildenstein cuts away an infected portion of the hoof on a Morgan horse in his shop near the Vet College. 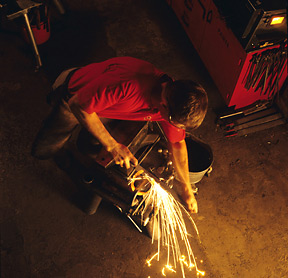 Copyright © Cornell University
Wildenstein puts finishing touches on a horseshoe that has been fashioned from steel bar stock, heated to incandescence in his forge and shaped on an anvil. 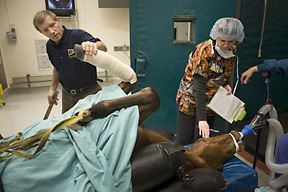 Robert Barker/University Photography
Wildenstein stops by the recovery room at Cornell's Hospital for Animals to fit an ibex cuff for a horse with an inferior checked ligament, as vet student Maria Martino-Cardona monitors the horse's pulse.

Horses are a study in improbability. Their bodies are massive, commonly weighing 1,000 pounds or more. All that mass is held up by four spindly columns of bone that have to line up just so as they pass through a series of delicate-looking joints. Underneath those columns, everything -- including the fate of the horse -- rests on four overgrown toenails called hooves. Far too many times to count, a diseased or injured hoof has spelled the end of an otherwise vital animal.

"See that bump on the knee here? The cannon bone comes straight, and then from the fetlock down he goes in. Now let's stand him up," says Michael Wildenstein, giving two veterinary students a leg-by-leg tour of a horse called Lobster. Wildenstein is the resident farrier at Cornell's College of Veterinary Medicine -- the only veterinary college in North America with a farrier program.

He points out the direction of the leg's radius, the position and angle of Lobster's cannon bone and how that impacts the fetlock, spelling out exactly what's going on and where it's going on. After detailing the reasons for the disparity between landing and load-bearing areas of the hoof in question, Wildenstein explains his plan of action, snatches a hoof knife from his rolling tool kit and deftly pares the bottom of the hoof.

He teaches constantly as he works, explaining the logic and the mechanics behind everything he is doing. After all, this man is one of the very best farriers in the world.

Several years ago, Wildenstein received his profession's highest distinction: certification as a fellow of the Worshipful Company of Farriers, a guild founded in London in 1356. Wildenstein is one of only 40 living farriers who have passed this ultimate test of mastery; and he is the first American, ever, to receive his fellowship with honors. He also recently was elected to the International Horseshoeing Hall of Fame at the Kentucky Derby Museum in Louisville, Ky.

Wildenstein has a whole boxful of shoes that he made for the fellowship examination and its associate level -- as well as some 400 shoes hanging in his shop, each tailored for a different disease or lameness type. All were fashioned from steel bar stock that he heated to incandescence in his forge and beat into shape on an anvil, much as farriers have done since before the Roman invasion of Britain. But while the technique is ages old, the design and precision craftsmanship of these shoes are like nothing his ancient brethren could have imagined. With their front, back or lateral elevation, removable plates, shortened sides, special cushioning, rolled toes, frog support, extra-wide stance or supporting bars, they address a long list of specific problems, whether caused by disease, injury or conformational defects.

Not all of the farrier's work is with equines. Wildenstein says he treats "pigs, cows, calves, whatever," using adhesives and other materials. He has had the opportunity to trim up some grizzly bears and a tiger. Once he trimmed the beak of a toucan. When asked if he just improvises in such cases, he responds with a bemused smile, "Improvise? What do you mean? A claw is a claw; a nail is a nail. It's all keratinous tissue."

Wildenstein, the co-author of "Draft Horses: An Owner's Manual" and numerous articles on hoof care and lameness, gets enough invitations to lecture that he could be on the road every weekend, but he holds to a schedule of once a month. He estimates that he gets 30 calls per day for consultations. Alumni who know him from their student days call for advice while out on calls; practitioners send him radiographs and digital images on a regular basis.

Of the 35,000 to 40,000 farriers in the United States, Wildenstein trains only nine per year, three at a time. Before he was one of those students in 1983, he spent two years in the Coast Guard, training cold-water survival instructors in Maine, "jumping out of helicopters and pulling in people." He attended the State University of New York-Potsdam and completed a horseshoeing program in Nova Scotia. After his Cornell training, Wildenstein spent several months with the farriers to the Budweiser Clydesdales, then went out on his own, specializing in draft show horses and honing his craft for five years in Denmark.

Wildenstein's work now is all about saving horses, and he probably saves as many of them from euthanasia as he once saved people from drowning. But he emphasizes that happy endings always involve teamwork with the clinicians in Cornell's Hospital for Animals.

"It's always a group of people who make it happen," he says.

This article was adapted from Cornell Veterinary Medicine magazine.