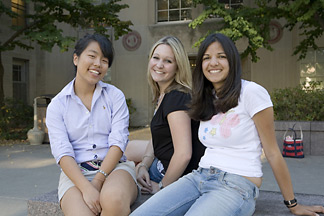 University Photography
Student bloggers, from left, Jennifer Lin '09, Jenna Bromberg '08 and Caroline Dias '08 are part of a pilot project meant to give prospective students and parents a representative picture of student life.

The world now has an inside look at the lives of six Cornell students through weblogs on the university's Web site.

"Life on the Hill," a pilot project online since late August, is an initiative of the Office of Web Communications, intended to give prospective students and parents a view of how students balance academic, social and recreational life. Six bloggers were chosen from the ranks of tour guides and Cornell Tradition members, out of more than 40 students who applied. Their blogs add to the dozens of others maintained by Cornell students and alumni (see list below).

"It's my goal to have the biggest breadth at Cornell involved," said Lisa Cameron-Norfleet of Web Communications, who oversees the project.The bloggers come from four of Cornell's six undergraduate colleges. One is in a fraternity, three are in sororities; one is blogging during a semester in Washington, D.C., and another will study abroad in the spring.

Bloggers are asked to post at least two entries a week, for which they receive $50 a month (in gift cards at first; then a stipend) and minor celebrity status. The blogs collectively received nearly 35,000 hits in September and more than 126,000 in October.

"The experience overall has been very positive," said Ben Crovella '07, an ROTC cadet. "Certain weeks it is difficult to get two to three posts in, especially during times of prelims."

"I would describe my blog as a cross between a late-night gossip session with my roommates and ... a chick lit book," said Jenna Bromberg '08, whose blog is titled "Oh, No She Didn't."

"I definitely wanted to show the world a different side of Cornell [including the School of Hotel Administration] that they may not have seen before," Bromberg said. "I'm all over the place, but it is definitely reflective of my interests and personality."

Jennifer Lin '09, who writes "The Sophomore Year Surf," said she considers herself a well-rounded "regular student" but that "it's hard for me to come up with topics that aren't related to my sorority, crew or my classes because that's pretty much what my life is about right now. I've been working on trying to make my entries more casual and more personal."

The students make each of the blogs their own, in design and in content, including photographs. Nikki Gusz '08, in "A Tale of Two Hills," begins each of her posts with a quote. She blogs about the Cornell in Washington program and has written about her family and cultural pursuits, and a poem about Cornell's libraries. "Because I am off campus this semester, blogging is a great way for me to relate my experiences and thoughts [on the program]," she said.

Likewise, Caroline Dias '08 is detailing the process of preparing for her semester in the United Kingdom, in "Cornell and Beyond."

The blogs are not edited or censored, although the bloggers themselves practice self-censorship.

"From day one, Lisa has stressed that there really are no restrictions in terms of what you want to write about, but the general rule of thumb is to be smart about what you write," Lin said.

The bloggers faced early criticism that they were serving as mouthpieces for Cornell, but that has died down.

"I post about pretty much anything," Crovella said. "If I go to a bar, I post about it. I blog about my fraternity, parties we have, events we participate in. This is really an important aspect of the blog, I feel, and without it many of the critics who claim we do not represent ourselves accurately would have valid points."

Alex Payne '09 said, "I especially have a fun time writing about controversial topics on Cornell's campus [such as criticism of the Student Assembly] and also in the real world of politics and sports. I do this to really make sure that the audience knows my blog is not a propaganda machine."

Since blogging as a practice is sometimes confessional in nature, there is some personal content in the Cornell blogs.

"I went through a rough time at the beginning of the semester and certainly alluded to it; the whole college experience is about finding yourself, and I think it's important to touch on personal things, too," Bromberg said.

Crovella said he has enjoyed chronicling his senior year.

"It has been fun to go back and look at all the things I have done," he said. "Even though the blog is intended for others to read, it has helped me learn a bit about myself and appreciate my last couple of semesters here at CU."

Cornell in the blogosphere