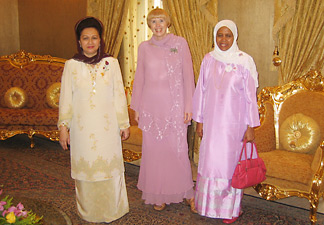 Rosemary Caffarella/Provided
The two lead researchers for the women's health project with the queen of Malaysia, who launched and helped support the first National Summit on Breast Cancer Education in 2006. From left: Her Majesty the Raja Permaisuri Agong; Rosemary Caffarella, Cornell; and Mazanah Muhamad, Universiti Putra Malaysia. 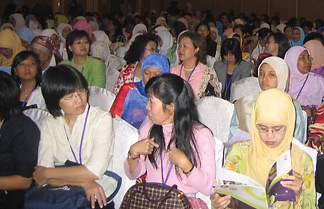 Provided by Rosemary Caffarella
Attendees at the summer 2006 opening session of the Conference on Women's Issues in Kuala Lumpur, Malaysia.

In 2002 Cornell professor and longtime breast cancer survivor Rosemary Caffarella received a call from a Malaysian colleague who had been diagnosed with the disease. Incredibly, the friend could find no information on breast cancer in Malaysian libraries.

Quickly, Caffarella was brought face-to-face with the scope of a problem that covers medical, cultural, linguistic and ethical realms.

Her efforts since (in partnership with Universiti Putra Malaysia, UPM) have begun to fill the breast cancer information gap in Malaysia.

Breast cancer literature in Malay languages, even in the official Bahasa Melayu language, did not exist largely because of cultural mores regarding privacy about women's bodies, lack of education about the disease and the lack of public hospitals to prescreen women and provide early diagnosis. "Despite the fact that almost two-thirds of the country's population is Muslim, women enter all walks of life and professions," said Caffarella, chair and professor in Cornell's Department of Education.

Since 2003, Caffarella has been one of the principal investigators in the Laboratory of Education and Research in Cancer at UPM, which has sought to develop an infrastructure to support Malaysian women suffering from breast cancer, build a network of interested groups, acquire funding and initiate translations of educational materials.

Breast cancer is the most common and deadliest form of cancer among Malaysian women, affecting about one in 16 women (comparable to the rest of Asia, but half the rate of occurrence in the United States). Malaysian doctors estimate that from one-half to one-third of the women who develop the disease die from it. At public hospitals, mammograms are only recommended after a lump has been detected. Also, says Caffarella, in most cases, breast tumors are in a more advanced stage when Malaysian women first see their doctors, compared with the early diagnosis that has become widely available in the United States.

"Even when women would come in and be diagnosed, often they would not come back for surgery," said Caffarella. "And if they had surgery, they may not have come back for radiation or other treatments." She added that due to lack of education and support, women may misunderstand why physically and emotionally draining treatments may make them feel sicker than the breast cancer itself.

Caffarella, with co-principal investigator Mazanah Muhamad, a professor of continuing education at UPM (the friend who initially phoned Caffarella about her breast cancer), and Cornell education postdoctoral researcher Mazalan Kamis, initiated the translation from English of 12 booklets on diagnosis, treatments, nutrition and commonly asked questions. The booklets, mostly American Cancer Society publications, were translated into Bahasa Malayu with the help of physicians, the Malaysian Translation Association and volunteers. The translations had to be culturally and linguistically appropriate. For example, Bahasa Malayu has no words for breast cancer.

Physicians and patients have been extremely appreciative of these materials, said Caffarella, noting that two government ministries have helped to distribute the materials around the country. With roughly two-thirds of the country native Malaysians (most of whom are Muslim) and one-third ethnic Chinese, plans are under way for booklets in Chinese and simpler, low-literacy translations for rural populations.

The project also has fostered support groups for women diagnosed with or dying from breast cancer. Project workers accompany patients on doctor visits and make sure they follow through with treatments.

The project's Malaysian support staff and volunteers also have been developing resource centers and traveling to cities and villages to educate people about breast cancer. In addition, seven research papers on the project have been given at international meetings.

Along with organizing the first major summit on breast cancer education held in Malaysia last summer, the project has helped to raise general awareness. The Ministry of Health is now putting mammogram machines for screening and early detection in the public hospitals. Also, UPM has just built a new hospital providing badly needed space for the project, and data are being collected to develop more complete statistics on breast cancer in Malaysia and on how women cope with this disease.

"We are hoping that we will have a nerve information center at UPM and subcenters throughout the Malaysian peninsula," said Caffarella. "We haven't even started work on island Malaysia [Borneo]. Overall, we would like to use this project as a model to take to other Southeast Asian countries and other parts of the world, like Africa." While the model might be similar for other areas, it would necessarily have to adapt to new issues and regional cultural sensitivities, she added.

The project is funded by Cornell, UPM, the Malaysian government, Exxon Mobil Malaysia, Boeing Southeast Asia, Dawama Press and MAKNA, a cancer research organization. In addition, the project has been helped by nonprofit organizations, including the American Cancer Association and the Malaysian Translation Association, and many volunteers.