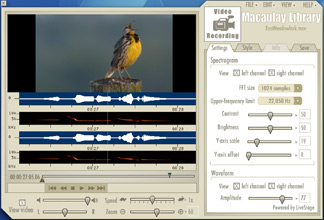 Provided
Visitors to the Macaulay Library of Natural Sounds' Web site can listen to birds, such as this meadowlark, while watching a real-time spectrogram and waveform scroll across the screen. Video footage is also available for some species.

For decades, the Cornell Lab of Ornithology has shared the remarkable sounds of birds and other animals with the public through audio guides featuring recordings hand-picked from the Macaulay Library of Natural Sounds' vast collection. Now anyone can explore the archive's holdings on his or her own. For the first time, more than 65,000 sound clips and some 18,000 video clips of birds and other animals are accessible for no charge at the Macaulay Library's Web site.

"We've long dreamed of swinging the doors to the archive open. Technology and dedicated work by our staff are, at last, making this a realization," said Greg Budney, acting director of the Macaulay Library. "That's important to our core mission in education and scientific research."

Although the online material currently has a North American emphasis, it includes a generous sampling from around the world. Visitors to the Web site can listen to the "Best of Collection," such as a western diamondback rattlesnake responding to a potential threat or a satin bowerbird courting mates. They can also search the collection for any animal, whether it is a backyard bird, a killer whale from Antarctica or an insect from Malaysia. Video footage is available for some species.

Visitors also can listen to birds while watching a real-time spectrogram and waveform scroll across the screen. The Macaulay Library's IT team developed this interactive visualization tool, called Raven Viewer. It is the first and only player that allows real-time visualization of sounds on the Internet. The player recently won second place in Science magazine's "Science and Engineering Visualization Challenge," which recognizes outstanding achievement in using visual media to promote understanding of scientific phenomena.

Miyoko Chu is a science editor at the Lab of Ornithology.

When it comes time to win mates, a strange bird -- Carola's Parotia bird-of-paradise -- from New Guinea performs a tough act to follow. After clearing a stage on the forest floor and laying down a mat of fungi, the male might do a hop and shake, head-shake walk or ballerina dance, in which he flares out his feathers dramatically, resembling a tutu. These are just a few of the dances he performs to impress a female, along with rhythmic vocalizations, wing rattling and such enhancements as iridescent plumage and wire-like feathers protruding from his head. This courtship display is one of the most complex in the animal kingdom and, until now, has rarely been witnessed.

Biologist Edwin Scholes, a visiting fellow at the Cornell's Museum of Vertebrates at the Cornell Lab of Ornithology, describes these displays for the first time in the October issue of the scientific journal The Auk. He captured video footage that is now available online through Macaulay Library, a multimedia "museum" of animal behavior.

The footage is the first instance of a museum archiving "behavioral specimens" and making them available online in association with a published study.

"In the past, researchers described the behavior of animals in publications, but in no case did others have ready access to actually see them," said Greg Budney, acting director of the Macaulay Library.

To see the dance, go to http://www.allaboutbirds.org/paradise.