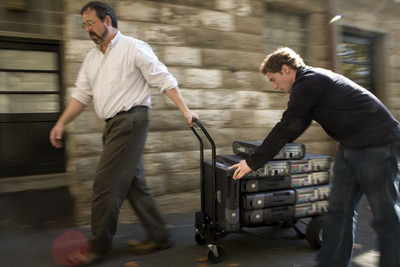 On a long car trip back to Illinois for Thanksgiving three years ago, Al Heiman had an idea.

"As I once taught first grade in Zambia, I'm keen to help education in sub-Saharan Africa in any way I can. My first thought was to donate computers to orphans in Africa," said Heiman, a public laboratories coordinator for Cornell Information Technologies (CIT).

He told his colleague Michael Tetteh, who is from Ghana, that sending Cornell computers to recyclers "is an incredible waste."

Within a year, Heiman had made contact with Steve Weissburg, a math teacher at Ithaca High School who had spent a year teaching at Botlhabelo High School, Brits, South Africa, which had no computers. The Brits Rotary Club raised $1,600 for shipping 20 computers to Botlhabelo and 20 to rural schools.

In September 2005, Heiman worked with Jean Mianikpo Sogbedji, a former professor of soil science-agronomy at Cornell who now heads up the soil science department at the national university in Togo. Together, they sent 10 computers (plus a laptop for the instructor) to Togo.

When Zaks Lubin '07 wanted to throw his computer away when it came down with a virus, he wondered, "How many people are really throwing out that computer that's really useful? Maybe there's something I can do to make sure they go to the right place."

"I've never worked with a group of volunteers who were all so focused, so intent on getting things done," said Heiman.

"GIAC is very thankful to Al Heiman and the Cornell Computer Reuse Club for their donation and set up of computers to the GIAC teen program," said Leslyn McBean-Clairborne, GIAC's deputy director, noting that teens who do not have computers at home can now complete homework that requires computers in a space where tutors are available. Additionally, the computers help close the achievement gap for many of GIAC's participants who are from low-to-moderate income homes, she said.

Heiman and CCRC students are now raising funds and gathering more computers -- sending 10 to rural Jamaica and several throughout Tompkins County. And, yes, more computers will be sent to Heiman's adopted country, Zambia, including to an orphanage in Lusaka, at the request of the Zambian Children's Fund.

To donate computers or to get involved with CCRC, contact Anthony Bartley at acb38@cornell.edu or Heiman at arh11@cornell.edu.

Leslie Intemann is a technical communicator with Cornell Information Technologies.