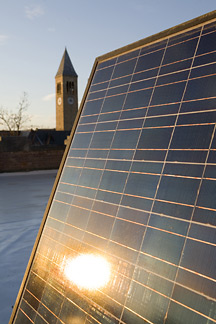 Lindsay France/University Photography
A detail of one of 54 newly installed solar panels on the roof of Day Hall.

When you look at the lighted face of the McGraw Tower clock at night, think of the sun, because the sun now supplies the university with enough energy to light the tower.

In late December workers completed the installation on the roof of Day Hall of solar panels that will generate slightly more electricity than is used by the clock tower lights, so the tower has been chosen to symbolize the new energy source.

The system was turned on and began feeding power into the university power grid Dec. 20. With 54 26-square-foot solar panels generating a peak 15 kilowatts (kw), it is the third largest solar array in Tompkins County after the Tompkins County Library, whose system is rated at 145 kw, and a recent apartment building installation rated at 16.7 kw. Eight similar panels, rated at 2.2 kw, will be installed over the loading dock of the Cornell Store.

"These installations will inform our campus community of renewable energy benefits and challenges, a necessity as we chart a future with significantly less environmental impact," said Dean Koyanagi, Cornell's sustainability coordinator.

Although the systems represent only a small part of the university's usage, they are seen as valuable demonstration projects and will have a teaching function.

"It's a wonderful teaching opportunity. We've had interest from about 20 faculty who wanted to use the system in their classes," reported Lanny Joyce, manager of engineering, planning and energy management in Cornell's Department of Utilities and Energy Management. Data on system performance will be tracked and posted on the Web, Joyce said, and students will be able to observe the Cornell Store system, which he said is comparable to a typical residential installation. The store plans to provide a description of the system on its large-screen video displays and on the Web. 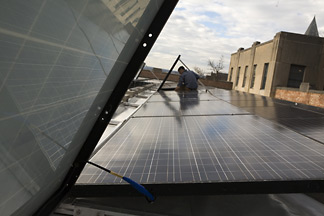 The project began with the donation of 90 solar panels by Cornell trustee emeritus Dick Aubrecht '66, Ph.D. '70, vice chair and vice president for strategy and technology at Moog Inc. Panels not used on campus may be installed at the Shoals Marine Laboratory.

Jeff LaPar, project manager in the Department of Planning, Design and Construction, led the project and said that the team effort has been key to success in applying the technology for the first time on campus. The system was designed by Performance Systems Contracting Inc., an Ithaca renewable energy and conservation firm. Installation was supervised by Rob Garrity '06, renewables project manager for Performance Systems. Labor was donated by the Electrician's Union through its current apprentice class. In return, the union had the opportunity to perform two solar installations under a certified installer, which will allow them to train other electricians in the technology and add union electricians to certified installers in the region. "Lynn Landon from the Electric Shop and the entire apprentice program have done an outstanding job," said LaPar.

The remaining cost to the university for design and materials for the Day Hall installation comes to about $50,000, which Joyce says is about one-third the cost of a typical installation. The cost is partly defrayed by a donation of about $13,000 from the Krich Family Solar Fund, launched by Abigail Krich '04, MEng '06, a longtime advocate for the use of renewable energy on campus and one of the founders of the KyotoNOW! student group, which works to reduce greenhouse gas emissions. At her graduation, Krich presented a $10,000 senior gift to the university to be used for a solar installation. Since then KyotoNOW! has solicited other gifts and added to the fund.

A plaque at the base of McGraw Tower will acknowledge the donors who made the system possible.