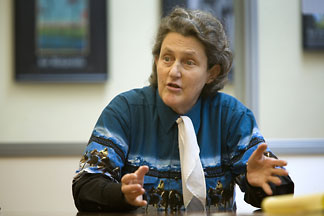 According to Temple Grandin, humankind would still be living in caves were it not for people with Asperger syndrome (AS).

"Who do you think invented the first stone spear?" she asked during an interview with the Cornell Chronicle on March 12. "It wasn't the people chit-chatting around the fire. It was the Asperger's."

Consider the contributions of such inventors as Nicolai Tesla, she noted. Or the many other autistic innovators long lost to history.

Grandin, Cornell's Frank H.T. Rhodes Class of '56 Professor, has AS, a form of autism that can cause behavioral impairments including poor social and communication skills, learning disabilities and restricted, repetitive activity. She doesn't deal in abstractions, nor can she long endure distractions. If you want a direct answer from her, she said, the best approach is to posit a "search term" as with Google searches -- and preferably "enter" a strongly visual term. A "hit" generates a flow of words and ideas drawn from a range of subjects she mentally categorizes "like tabs in a file folder," she said.

Autism was the subject of Grandin's well-attended Bailey Hall lecture March 13, where she presented a compelling case for early detection and intervention for children with behavioral problems indicative of autism.

Like so many diagnosed with AS, Grandin is exceptionally brilliant in her field. An associate professor of animal science at Colorado State University, she is a renowned designer of humane livestock facilities. Grandin often relates her affinity for animals to her own struggles with autism. Her method of putting what she sees into categories has strong parallels, she said, to the way animals perceive the world.

Her books include "Animals in Translation" and "Thinking in Pictures," and she is the subject of the title essay in "An Anthropologist on Mars" by Oliver Sacks, a former A.D. White Professor-at-Large at Cornell.

During her interview, she said: "The worst thing you can do in schools is take children with autism and throw them in a special ed class and let them rot. ... There are kids with 150 IQs sitting in special ed classes. They need one-on-one work with a good teacher" -- and if a teacher isn't available, she added, an older person, perhaps a grandmother, "can make a great teacher who can help these children learn how to interact socially. They need to learn how and when to say 'please' and 'thank you' and 'hello.'"

She noted that "there are still doctors who will tell parents of a child presenting autistic behavior that 'oh, he'll just grow out of it.' The worst thing parents can do is wait."

Intellectual training also requires skilled educators who draw out a child's strengths rather than emphasizing learning deficits, Grandin said. Many autistic children have exceptional talents, but these tend to bunch in narrow, tightly focused areas. Far from the image of a silent child rocking furiously in the corner of a room, Grandin sees highly functional AS people everywhere she goes, she said -- on the cover of BusinessWeek, in airports, university campuses and machine shops.

Silicon Valley, for instance, is a virtual hive for autistics with highly prized technological skills, she said. But those are the lucky ones. "The unlucky ones wind up in dead-end jobs."

Autism has been getting a lot of media attention lately, but that's not because it's anything new, according to Grandin.

"Asperger's has always been here, that's the milder autism -- 'the nerd' is the common term for it," she said. But there is an increase in severe autism, she said, "where a child seems to be normal until about 24 months, where he is developing speech and then loses it. That's called regressive autism, and it's on the rise."

Theories on autism abound and are often controversial -- and the diagnostic criteria for the syndrome have widened.

Grandin believes the syndrome is largely genetic -- but like others knowledgeable about the illness, she doesn't know what is causing the increased prevalence.

"There's a lot of talk about vaccine reactions, and I've talked to enough parents where I think that is a factor," she said. "In some of these cases I think some sort environment insult to the brain" -- such as heavy metal poisoning -- "may be a factor."