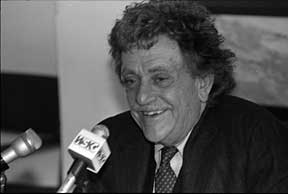 In 1980 the novelist Kurt Vonnegut Jr., who died April 11 in Manhattan at age 84, returned to Cornell for the first time since leaving the university in 1943 to serve in World War II. He came to campus to speak at an alumni banquet celebrating the 100th anniversary of The Cornell Daily Sun, the student newspaper, where he was a columnist and editor.

His father had insisted, he recalled at the banquet, that he study chemistry, a subject he loathed. "He said I should become a chemist like my brother, and not waste my time and his money on subjects he considered so much junk jewelry -- literature, history, philosophy."

Thirteen years later he returned to the campus to give a talk. "If you really want to hurt your parents and you don't have the nerve to be a homosexual, at least go into the arts," he advised his student audience.

Vonnegut's aversion to chemistry proved a boon to American literature. In novels such as "Slaughterhouse-Five," "Breakfast of Champions" and "Cat's Cradle," Vonnegut became a leading anti-war voice of 1960s and 70s and an icon of the counterculture: darkly funny, morally outraged, implacably opposed to authority and the status quo. 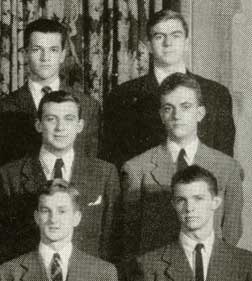 During his three years at Cornell -- Vonnegut never graduated, having been drafted into the U.S. Army -- the Sun was his salvation. "I spent the whole time I was here working on the Cornell Sun, and that's how I got my liberal arts education," Vonnegut once said. "I never made a systematic study of literature, so I don't have the usual vocabulary for discussing it." The great writer also remembered making the gaffe of a tyro editor: He spelled Ethel Barrymore "Ethyl" in a Sun headline.

"Cornell was a boozy dream," Vonnegut once remembered, "partly because of the booze itself, and partly because I was enrolled in courses I had no talent for." He later elaborated: "Being drunk was utterly acceptable. That's when I first decided this country was crazy."

In 1983 Vonnegut told his Cornell audience that there are two kinds of writers: those who build on existing literature and those who respond to life itself. "I'm in the latter category," he said. "That's probably why I'm always uneasy in the presence of other novelists. There's no evidence I'm building on the past at all."

He didn't need to. His 1969 novel "Slaughterhouse-Five," the story of an American soldier who witnesses the destruction of Dresden by Allied firebombs, emerged from his experiences in a German prison camp and became his most widely read book. He wrote plays, essays and short fiction in addition to 14 novels.

After his army service as a rifleman, Vonnegut worked in public relations at General Electric. He said he became a writer when he received a $3,000 check from the Saturday Evening Post for a weekend of work while GE was paying him $5,000 a year. He went on to study for a master's degree in anthropology at the University of Chicago, where his thesis on "The Fluctuations Between Good and Evil in Simple Tales" was rejected; more than 20 years later the university accepted his novel "Cat's Cradle" as his thesis.

Born in Indianapolis on Nov. 11, 1922, Vonnegut was a fourth-generation German American. His mother committed suicide in 1944, on the eve of Mother's Day, after years of struggling with mental illness. Death was a constant preoccupation in Vonnegut's work. But in keeping with the contradictions always present in his fiction, Vonnegut also believed in human kindness as a redemptive force. He loved large families, had four children with two wives, and adopted his sister's three children.