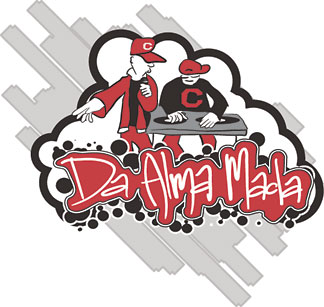 It was hardly the intention of Josh Raff '07 and Eli Northrop '07 to catch the attention of the Cornell community and President David Skorton when the two first penned a hip-hop rendition of Cornell's alma mater. The song was a class project for Northrop, a psychology major, who had enrolled in a digital music class his junior year "just to learn how to make beats." He enlisted the help of friend and fraternity brother Raff to write the lyrics, and the two recorded a rough copy of the song, "Da Alma Mada."

The following summer, Raff was contacted by friend Sam Coe '07, who needed a band to join him for a show at Welcome Weekend's 2006 CU on the Slope event. With vocalist Nellie Thompson '07, they formed a group, which under the name Pants Velour ultimately enlisted Northrop's unmistakable presence and "Da Alma Mada" as part of the act.

"We rewrote it for the performance on the slope," explains Raff. "Originally it had the name of the professor in the class the song was for, but President Skorton had just been elected, and his first two initials happened to be D.J."

Northrop adds, "We didn't know anything about him, but we went to the inauguration. There were all these music groups there; we found out he was a musician, and I decided to send it to him. A few days later he e-mailed me back, and said, 'Hey, this is great!'"

After Commencement, Pants Velour will be dissolved as its members go their separate ways. "It's cool to have been able to connect to the Cornell community," says Northrop.

"My only regret is that we didn't do it sooner," adds Raff.

By Eli Northrop and Joshua Raff 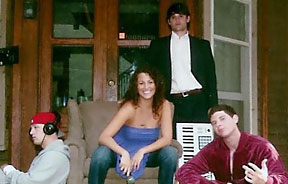 Turn off of 81, start picking up speed/ enter Ithaca, welcome to the Ivy League/ son, uh, hit with elation/ receiving your education/ that's right, uh huh uh huh, please believe me/ we are talking about Cornell Universiteezy/ it lies upon a location remote/ but it's dope engulfed with hope, have you seen libe slope?/ to be honest, right quick, the weather's not the best/ is it snowing already? Damn it's only august/ yea yea, this weather is funny/ it could be sunny with Santa or hail with the Easter bunny/ no worries, you won't even notice it cuz/ if you want you can ride the TCAT bus/ it can take you here or there, C-Town to central of course/ or to Mary Donlon where I resided on North/ ah the good old days, freshman year/ before you know it time has passed and you're a senior here/ but I still stray back rolling with friends in a bunch/ eating three subs and a milkshake from Louie's Lunch/ and because I'm rather lazy, I'm in luck/ cuz ATO is right across the street from the Hot Truck/ yes the food at Cornell is one of a kind/ RPU, Ivy Room always a pleasure to dine/ and if we're in accord in/ the fact that we have much respect, for DJ Skorton/ and we didn't go to Harvard, don't mean to be haters/ but we serve you fresher tracks than Cayuga's Waiters/

It's Cornell y'all
Do you get it?
Cornell dog, and don't forget it
That old track was hot
But this track is hotter
This here's the new Cornell Alma Mada

Shout outs all around up and down giving pounds/ to the Trillium and Goldwin Smith and Collegetown (word)/ seven different schools teaching seven different tools/ utilizing for future generational rule/ you feeling elite you should get a big head/ and go to sporting events and scream "Go Big Red!"/ It's Cornell y'all, do you get it?/

Raffropuffs and Eli, and we're laying this track/ and like Bear Access we giving just the facts/ and there are no substitutes to this song we wrote/ do not attempt to reproduce, just like TakeNote/ and my days of fun have never quite begun/ until I get my morning serving of the Daily Sun/ and overall, I'd say I like my position/ and intuition to apply here early decision/ you know the campus is big, the hills enormous/ and it's stressful but refrain from jumping into the gorges/ well you can, if it's recreational/ and I've done it, the feeling's sensational/ and in May, you might say/ all the work was worth it when you get to Slope Day/ it's always snowing, and hailing, with sleet and slush/ but just seek shelter in Lynah for an adrenaline rush/ you know the true troopers, who are able/ camp outside for three days to become Lynah Faithful/ and down on Tower Road though it's a little bit far/ get some homemade ice cream from the Dairy Bar/ yea, I think it's safe to say there's something going on here like every day though it's a tough four years it's even tougher to leave/ and you'll be set walking out of here with a degree/ so E? What up Raff?/ Can't you see? What's that?/ That Cornell University is the place to be/ it's the best there ever will be and the best there was/ Cornell up in here, and that's because/ and that's because, and that's because…and that's because/