Chefs have long used a simple trick to differentiate between a raw and hard-boiled egg. By spinning an egg and watching how it behaves when the spin is disrupted, it's easy to tell whether its interior is solid or liquid.

Applying a similar test to the planet Mercury, astronomers have found strong evidence that the planet closest to the sun has a fluid core. The research, led by Jean-Luc Margot, assistant professor of astronomy at Cornell, appears this week on the Web site of the journal Science.

Margot and collaborators conducted a series of observations over five years using a novel technique to detect tiny twists in Mercury's spin as it orbits the sun. The twists, called longitudinal librations, occur as the sun's gravity exerts alternating torques on the planet's slightly asymmetrical shape. 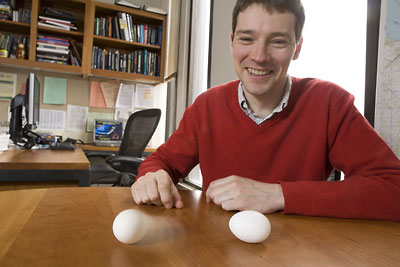 They found that the magnitude of the librations was double what would be expected for a completely solid body -- but explainable for an object whose core is molten and not forced to rotate along with its shell.

Mercury is thought to consist of a silicate mantle surrounding an iron core, but because small planets like Mercury cool off rapidly, the core should have frozen long ago. Maintaining a molten core over billions of years requires that it also contain a lighter element, such as sulfur, to lower the melting temperature of the core material. The presence of sulfur supports the idea that radial mixing, or the combining of elements both close to the sun and farther away, was involved in Mercury's formation process.

A molten core also gives weight to the idea that Mercury's magnetic field, which is about 1 percent as strong as Earth's, is caused by an electromagnetic dynamo.

The researchers used three telescopes -- the NASA/JPL 70-meter antenna at Goldstone, Calif.; and the National Science Foundation's Arecibo Observatory in Puerto Rico and Robert C. Byrd Green Bank Telescope in West Virginia -- to measure slight changes in Mercury's spin. The system involved sending a powerful radar signal at the planet, then receiving the signal's echo, which appeared as a unique pattern of speckles reflecting the roughness of the planet's surface, at two locations separated by about 2,000 miles.

Measuring how long it took for a particular speckle pattern to reproduce at the two locations (about 10 seconds) allowed Margot to calculate Mercury's spin rate with an accuracy of one part in 100,000.

The experiment included 21 such measurements, very carefully timed since Mercury and Earth are only in the necessary alignment for periods of 20 seconds at a time. "Everything has to happen within that 20-second time window," Margot said. 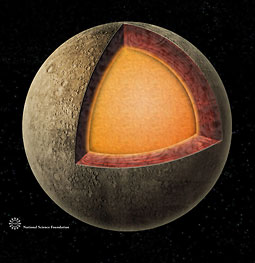 Nicolle Rager Fuller, NSF
Diagram showing the interior structure of Mercury. The metallic core extends from the center to a large fraction of the planetary radius. Radar observations show that the core or outer core is molten.

In the years since, Peale showed that Mercury's interior could be characterized in detail if four properties could be determined: the libration amplitude; the planet's obliquity, or the inclination angle of its rotational axis in relation to its orbital plane; and two values called gravitational harmonic coefficients. Peale's formula also required that Mercury be in a Cassini state, a stable orbital configuration that characterizes the end of tidal evolution.

Finding those properties from Earth was long thought to be impossible. But this unusual radar technique (the method was first proposed to determine the spin rate in the 1960s; its use for finding the spin orientation was proposed by co-author I.V. Holin about two decades later) allowed the researchers to measure the planet's librations and obliquity -- and to show that Mercury is almost certainly in the required Cassini state.

Mercury still has its share of mysteries. Some may be solved with the NASA spacecraft Messenger, though, launched in 2004 and expected to make its first Mercury flyby in 2008. The spacecraft will begin orbiting the planet in 2011.

"It is our hope that Messenger will address the remaining questions that we cannot address from the ground," Margot said.

The paper's other authors are R.F. Jurgens and M.A. Slade of NASA's Jet Propulsion Laboratory.