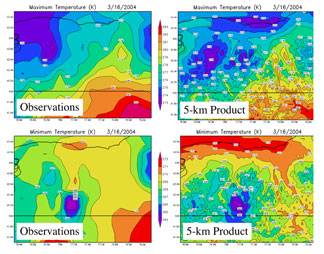 Provided
Broad scale temperature data supplied by satellites and ground stations can be corrected for elevation and interpolated by high performance computers down to a resolution of 5 kilometers. 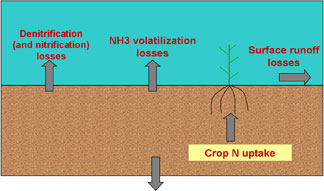 Provided
Not all nitrogen added to the soil as fertilizer is taken up by plants. Some runs off into waterways, some is lost as ammonia and some is converted by bacteria (a process called dentrification) into nitrogen and nitrous oxide gasses. Computer models combined with real-time climate data can predict this process and avoid overfertilization and environmental damage.

You don't usually think of using "high-performance computing" and "agriculture" in the same sentence. But pulling together all the weather data from hundreds of sources every day, year round, then sorting out just the part needed by a farmer 35 miles east of Canton, N.Y., calls for a supercomputer. So scientists in Cornell's College of Agriculture and Life Sciences (CALS) are using the facilities and expertise of the Cornell Theory Center (CTC) to turn reams of weather and climate data into practical advice for New York state farmers.

Soon, a farmer will be able to enter information about the farm on a Web page and receive recommendations for how much nitrogen fertilizer to apply to a corn crop, tailored to the farm's location within 5 kilometers (km) or less.

"This is a fairly significant leap forward in information for farmers," says Harold van Es, Cornell professor of crop and soil sciences and co-director of the Cornell Computational Agriculture Project. Cornell, the land-grant college for New York state, is uniquely positioned to offer such a service, van Es points out, through collaboration between CALS, CTC and the Northeast Regional Climate Center at Cornell.

The project was launched four years ago with special funding from the U.S. Department of Agriculture (USDA). "It was clear that all of the federal agencies except the USDA were involved in high-performance computing in some way," says Linda Callahan, executive director of CTC. "I convinced them that they ought to be putting some funding into high-performance computing."

Every day, the climate center receives temperature, wind and precipitation reports from radar, satellites, weather balloons and ground stations with an overall resolution of 40 km. Programs developed by earth and atmospheric sciences professors Art DeGaetano and Dan Wilks and climate center staff combine the data with information from 250 small ground stations across the state and a model of how temperature varies with elevation to interpolate temperatures down to 5-km. squares. Precipitation reports from radar already have a resolution down to 4 km. Pat Sullivan, associate professor of natural resources, is researching ways to make the interpolation process more accurate.

The results are entered into a database that has been accumulating data since early 2005. Eventually, says DeGaetano, who is director of the climate center, the database could be used to refine other applications, including turfgrass management and mosquito control. "Now," he explains, "we take data from the weather station on Game Farm Road [in Ithaca], and you have to assume it's the same in Trumansburg."

Whether fertilizer comes out of a bag or in the form of cow manure, a key ingredient is nitrogen. A computer program developed by van Es and senior research associate Jeff Melkonian combines climate data with information such as soil type, planting history and recent fertilizer applications to determine how much new nitrogen crops need.

Graduate student Ivy Tan works with van Es and Jon Conrad, professor of applied economics and management, on computer models that will add financial dimensions. More fertilizer may increase yield, but considering the cost of the fertilizer along with the current price of corn, it may actually reduce profit.

Tan also is working on a model that will show how much nitrogen will be converted to nitrous oxide, an important but seldom mentioned greenhouse gas. "Nitrous oxide is lost in smaller quantities, but one molecule of nitrous oxide has the same greenhouse effect as 300 molecules of carbon dioxide," van Es explains.

Ultimately the Web site will include feedback on the social costs of using nitrogen fertilizer, showing its effect on water quality and climate change. The Cornell scientists expect that many growers will take these factors seriously, even if it means sacrificing some profitability. "Farmers are stewards of the land, and they tend to be sensitive to that," van Es says.

A project involving Susan Riha, the Charles L. Pack Research Professor of Forest Soils, and Ph.D. student Andres Berger will eventually apply the nitrogen model to weed control, taking into account such factors as soil conditions and the ability of the crop to compete for light and nutrients.

Another number-crunching project by van Es' group will process data from optical spectroscopy, which provides a quick analysis of soil using reflected light. The data from thousands of readings will be entered into a statewide database of soil properties, and the group will validate spectral analysis against chemical, physical and biological analyses of the 2000 or so soil samples sent every year to Cornell's soil health test laboratory.

The Computational Agriculture Initiative receives more than $200,000 a year from the USDA Cooperative State Research, Education and Extension Service, initiated through the office of Rep. Maurice Hinchey (D-N.Y.), with additional support from the Environmental Protection Administration, the National Oceanic and Atmospheric Administration and CTC.