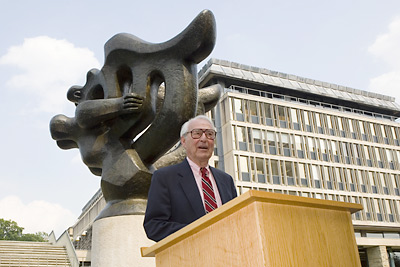 Lindsay France/University Photography
Sculptor and professor emeritus of art Jack Squier, MFA '52, speaks at the unveiling and dedication of "The Song of the Vowels" sculpture between Olin and Uris Libraries, June 8.

"The Song of the Vowels" (Le Chant des Voyelles), cubist Jacques Lipchitz's 10-foot-tall abstract sculpture, has returned to the Cornell campus after almost two years of conservation treatment. The massive bronze looms atop a new limestone pedestal between Uris and Olin libraries, surrounded by a redesigned plaza with granite pavers, stone benches and new landscaping.

Alumni, faculty and staff celebrated the unveiling of the refurbished sculpture June 8, during Reunion Weekend.

Worth an estimated $4 million to $5 million, "The Song of the Vowels" is one of Cornell's most valuable works of art. Lipchitz said about it in 1946: "The title has no connection with the famous poem of Rimbaud, but rather with a legend of ancient Egypt, according to which it appears there existed a prayer, the 'Song of the Vowels,' which the priests and priestesses made use of to conjure up the forces of nature." A colleague of Picasso, Gris and Modigliani, Lipchitz moved from Lithuania to Paris in 1909 to study art, then fled France and the Nazis for the United States in 1941.

Lipchitz originally designed "The Song of the Vowels" for the garden of a house designed by Le Corbusier. It was cast in 1931, long after Lipchitz's Cubist period, in an edition of seven copies (others are at Princeton University, University of California-Los Angeles, Stanford University, Kykuit Gardens in Tarrytown, N.Y., and two sites in Paris).

"This work really is one of the icons of 20th century sculpture," said Frank Robinson, the Richard J. Schwartz Director of the Herbert F. Johnson Museum of Art. "It represents a remarkable growth in his style away from the very strict, sustained geometric forms of [his sculpture] 'The Bather' and into something more sensual, organic and tactile." Robinson continued, "The work itself is a fluid, imaginative mixture of different visual forms: a harp that becomes a bird that becomes a hand."

From the moment the sculpture arrived on campus in 1962 -- the gift of Harold D. Uris '25 and his brother, Percy, to the Cornell Library -- it was subject to comment, according to Anne R. Kenney, interim university librarian. Citing articles of the day, she quoted an Ithaca man describing "The Song of the Vowels" as "this scandalous piece of foolery."

Jack Squier, MFA '52, professor emeritus of art, was instrumental in bringing the Lipchitz to Cornell through a "weird and strange" series of coincidences. Just out of Cornell, Squier cast his modest bronzes at the same foundry where Lipchitz created his own massive works -- and where he treated aspiring sculptors like Squier with kindness.

Squier arranged a retrospective for Lipchitz's 70th birthday at Cornell in 1961 (the artist died in 1973). Squier recalls that the artist's charm and salesmanship were on view on subsequent visits to the university, particularly when Lipchitz impressed on the Uris brothers that he would be much happier if they also bought a second of his sculptures. Today, Lipchitz's "The Bather" stands inside Olin Library.