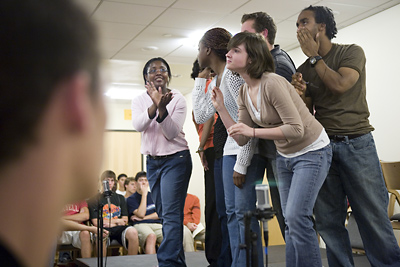 "You get financial aid? But you're Jewish!"

"I don't know what her name is, but look at that rack!"

"I sat next to a terrorist on the plane here. I can't believe they let him on!"

These provocative one-liners opened the Aug. 20 premiere performance of this year's "Tapestry of Possibilities" in Robert Purcell Community Center, a show presented 19 times during Cornell's Orientation Week for new freshmen and transfer students.

Written and performed by the Cornell student theater troupe Ordinary People, the edgy skits were aimed to take new students "out of their comfort zones and into a discussion about Cornell's expectations about civility and freedom with responsibility," said Kent Hubbell, Cornell's dean of students, who moderated one of the post-performance discussions.

"One of the greatest reasons to be a student at Cornell is the diversity," he said. "However, feeling at home in a place like Cornell is a fragile process. Bear in mind that this has got to be a home for every student because we want them to succeed throughout their four years here." 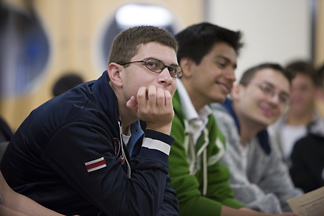 Ordinary People strives to counter any form of bias by showing situations that new students at Cornell could encounter, whether through religion, race or sexual differences.

"We recognize that students come to this community of Cornell from so many different backgrounds and experiences," said Susan Murphy, Cornell vice president for student and academic services. Through the show, "we hope to expose them to the challenges -- and opportunities -- that exist because of this incredible diversity and also to sensitize them to things that might be hurtful to others. Having current Cornell students write the scripts and be the actors makes this conversation much more authentic and real."

In one scene, for example, a white father from East Hampton, N.Y., calls Cornell with concerns about his daughter's future roommate.

"Her name is Diana Rodriguez, and she is from Bronx, New York." 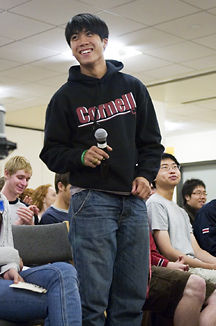 Lindsay France/University Photography
Sydney Thai '11 shares his opinions about the scenes performed at this year's Tapestry of Possibilities program, Aug. 21.

"It says here that she went to Bronx Science, which I hear is a good school, but that place is riddled with gang activity. We fear for our daughter's safety. What if she gets her wallet stolen?"

At this point the audience started to laugh because the father's fears sounded so ridiculous. However, the scene takes an unexpected twist when the daughter announces that she has just found a date for the prom.

During the discussion after the skits, Mike Shub '08 related the skits to his first-year when his parents were so excited because his roommate was named Schreiber. "They thought he was a nice Jewish boy," he said. "They told everyone -- my uncles, my cousins. When I got to Cornell, I found out he was a gay Protestant. My parents still don't know."

"I think this was a very good show for new freshmen," said Sonya Burns '11. "It gets everyone thinking about these issues, which is important, because all of us come from very diverse backgrounds. "Asking questions isn't a bad thing, because most of these problems stem from ignorance. You have to be open to learning about others."

Julia Langer '08 is a writer intern for the Cornell Chronicle.