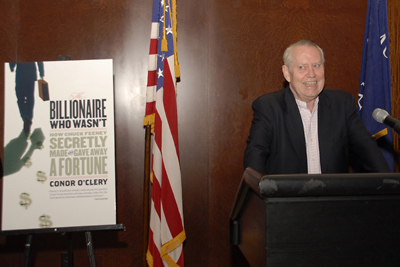 Nuala Purcell/Provided
Chuck Feeney speaks at a book party for his biography, Sept. 24 at the Mutual of America Building in New York City.

One of the most generous Cornellians alive today is one you've probably never heard of -- at least, until this week.

While Chuck Feeney's name is not attached to any building or professorship, the 1956 Hotel School graduate is behind only Ezra Cornell and A.D. White in his overall contributions to the university, according to Cornell President Emeritus Frank H.T. Rhodes.

Feeney never requested recognition. In fact, he forbade it.

But in 2002 the businessman, whose foundation had secretly given billions of dollars to good causes, authorized the writing of his biography. The book, "The Billionaire Who Wasn't: How Chuck Feeney Secretly Made and Gave Away a Fortune" by journalist Conor O'Clery, published by PublicAffairs, was released in the United States this week.

Feeney, who made his fortune with duty-free shops, is credited with supporting hospitals and schools in Vietnam, mitigating poverty in South Africa and contributing to the peace process in Northern Ireland. He has supported higher education on a broad scale, particularly in the Republic of Ireland. Cornell also has been a major beneficiary: Atlantic Philanthropies (AP), the charitable foundation Feeney founded, has, over a span of 25 years, given almost $600 million to the university.

Without Feeney's support through AP, says Rhodes, some of the university's most important projects over this period would not have been possible. AP's support allowed Cornell to launch the Cornell Tradition and the Presidential Research Scholars programs (now named for President Emeritus Hunter Rawlings), the Life Sciences Initiative, the Tri-Institutional Research Program, the Hotel School expansion, and the transformation of North and West campuses. Without him, Cornell would be a very different place.

He has been described as shy, modest, determined and mischievous. He flies coach and wears sweaters with holes. He does not own a home or a tuxedo.

He was, O'Clery writes, a born entrepreneur. As a boy in Elizabeth, N.J., he rented beach umbrellas in the summer and sold Christmas cards and organized a snow-shoveling business in the winter. At Cornell's Hotel School, which he attended on the GI Bill after a tour with the Air Force, he established a booming sandwich business. He was known around campus as "the sandwich man."

But it was his Duty Free Shops (DFS) that made him wealthy. The business started in 1965 with three counters, held together with Scotch tape, at Honolulu International Airport. By the late-1970s he was reaping millions, and in 1982 he and his associates established the Atlantic Foundation in Bermuda as a way to give some of it away (and as a way of avoiding U.S. reporting requirements for foundations).

In 1984 Feeney signed away between $500 million and $800 million to the foundation -- reducing his own wealth to less than $5 million. Partly out of modesty, and partly out of concern that giving publicly to an organization would discourage others from giving to the same organization, he insisted that the foundation's donations be kept secret.

Feeney stepped briefly into the spotlight in 1997, when he and his associates sold a controlling interest in DFS to LVMH Moet Hennessy-Louis Vuitton. New York Times writer Judith Miller wrote that Feeney had secretly given away more than $600 million to universities, medical centers and other organizations. The Atlantic Foundation noted at the time that Cornell got the largest share.

But the buzz died down quickly, and the foundation (which became Atlantic Philanthropies) continued to demand confidentiality.

"[Feeney's] condition of giving was that it must be anonymous," says Rhodes, now chairman of AP's board of directors. "He still refuses to have his name on things. He's a modest man; he has a natural reticence."

Feeney authorized the biography, O'Clery writes, to encourage others to follow his example.

"I believe that people of substantial wealth potentially create problems for future generations," Feeney wrote in 1997, "unless they themselves accept responsibility to use their wealth during their lifetime to help worthwhile causes."

"Many universities share the benefits of visionary people who become wonderful benefactors. The great thing about Chuck was that he was willing to do it anonymously," says Rhodes. "He only went public in hopes of encouraging others to do the same. He is a shining example of the power of individual leadership. ... [His] example is so powerful; it's all the more powerful for his quietness, his refusal to get personal credit."

Since 1982, Chuck Feeney's gifts to Cornell, given anonymously through his Atlantic Philanthropies foundation, have helped support or even create a great number of broad initiatives. Altogether these gifts amount to almost $600 million.

They include funds for: