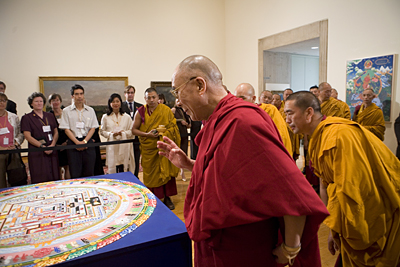 Robert Barker/University Photography
The Dalai Lama observes an intricate mandala created of colored sand by Tibetan Buddhist monks of the Namgyal Monastery based in Ithaca and Dharamsala, India.

Among the Dalai Lama's stops while on the Cornell campus on Oct. 9 was the Herbert F. Johnson Museum of Art, where he blessed an exhibit of two mandalas.

On Sept. 11, Tibetan Buddhist monks of the Namgyal Monastery in Dharamsala, India, and its branch in Ithaca began to construct the two mandalas. The first, a large Kalachakra mandala, was drawn of colored sand. The second mandala was a 3-D construction of colored string. Both suggest a microcosm of the universe.

In spiritual practice, mandalas act as an aid to meditation by focusing attention and establishing a sacred space. Their symbolic nature can help a person reach deeper levels of the unconscious. Psychoanalyst Carl Jung saw the mandala as "a representation of the unconscious self."

To illustrate the impermanence of human life, the mandalas will be destroyed on Oct. 13.

The Johnson Museum mandalas were funded in part by a grant from the Cornell Council for the Arts and co-sponsored by the Cornell East Asia Program.