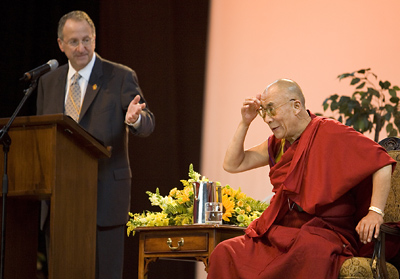 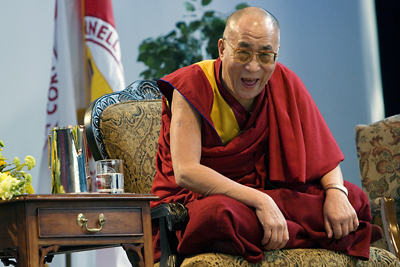 Robert Barker/University Photography
The Dalai Lama exhibits his affable sense of humor during his talk.

His Holiness the 14th Dalai Lama, the spiritual leader of Tibetan Buddhism, told an audience of about 5,000 people in Cornell's Barton Hall today (Oct. 9) that world peace begins with individuals finding their own inner peace. Genuine peace, he declared, "must come from internal peace."

In his second visit to campus -- the first was in 1991 -- the Dalai Lama spoke on "A Human Approach to World Peace." The lecture also was streamed live on the Internet and telecast for overflow audiences at two locations on campus.

"Peace does not mean just a mere absence of violence," said the Dalai Lama, who was awarded the 1989 Nobel Peace Prize. He commented that if two countries point nuclear warheads at each other, and peace is created because "both sides are ready to shoot," that truce is based on fear and negativity and is not true peace.

Speaking seated cross-legged on a simple upholstered wooden armchair set on a small stage, the Dalai Lama said that "nonviolent action depends entirely on peace of mind." If a person's mind is strong and peaceful in the midst of a hostile situation, then the situation can be handled with clarity, he said, adding that by expressing warm-heartedness and compassion, a person can solve difficult problems without losing basic human values.

With an infectious humility and affable sense of humor, the Dalai Lama won over the audience by saying he preferred to speak in an informal manner that reduces barriers. The most important experiences in life, he pointed out, are birth and death, which occur without formalities.

He also noted that "our basic physical structure" is "not like tigers -- those meat-eater animals," which "in order to take other lives, they are equipped in a special way" with claws and large teeth. In "our own case, our nails are very gentle," he said. Our teeth are "made to smile" and our "fingers are well-equipped to shake hands" and to hug.

Compassionate people, he averred, have a balance of calm mind and physical health. They have better blood circulation and digestion and sleep better, whereas people who carry anger and hatred inside them also suffer physically. "Our body element is closer to those positive emotions," he said.

The way human life is structured, he said, shows the importance of human affection. For example, from the moment of birth, the "child shows tremendous close feeling" to his mother, who gives her or him milk, and in turn, mothers also express care and love. "Our survival is entirely based on mother's care," he said, adding, "We are born with the potential for compassion."

He then talked about his own mother, who was uneducated but whom he described as always very kind. "We never saw our mother's angry face, always gentle," he said. Born in 1935, he was discovered as the reincarnation of the 13th Dalai Lama when he was 2 and began his monastic education at the age of 5. He said his mother's compassion has affected him and stayed with him all his life, leading him to show compassion to people, animals and insects alike, with the exception of mosquitoes, he joked. 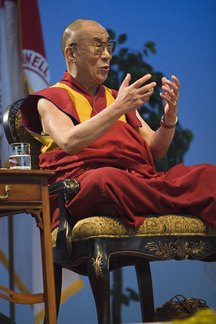 He added that his own flight into exile from Tibet in 1959 and what he described as the harsh treatment of Tibetans at the hands of the Chinese government has created some difficult periods, but the "compassion I learned from my mother has been an immense source of inner strength, not through education or religion, but through nature."

The Dalai Lama's talk was sponsored by Namgyal Monastery Institute of Buddhist Studies in Ithaca. On Oct. 10, he will participate in an interfaith service at Ithaca's State Theatre and give a Dharma teaching at Ithaca College.

Video of the speech on campus is available at CornellCast: http://www.cornell.edu/video.