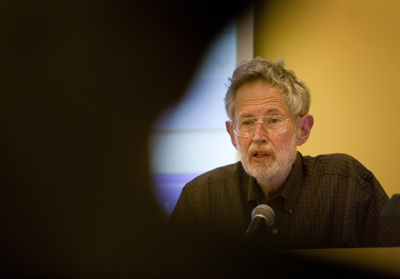 Martin Bernal, author of "Black Athena: The Afroasiatic Roots of Classic Civilization," continues to take his lead from late-18th-century Western scholars who looked to Egypt -- not Greece -- as the root of ancient culture. While Greece has long since become the predominant cultural model, Bernal, Cornell professor emeritus of Near Eastern studies, addressed his controversial research in a lecture at the Africana Studies and Research Center, Oct. 15.

The controversy centers on what scholars since the 1800s have come to view as the "Aryan model" of Greece as the center of math, science, medicine, art and culture in the west -- prior to its invasion by Europeans. Bernal argues that historians from the 1700s, and even the ancient Greeks themselves, went by the "ancient model" that the seafaring Egyptians and Phoenicians had colonized Greece and introduced new ideas and culture.

Bernal said that evidence doesn't support the Aryan theory any better than the ancient one and blames the prevailing trends on 19th-century society. For intellectuals and scholars at the turn of the 19th century, he said, the cold reason of the Enlightenment was abandoned for the sentimentality of the Romantic Era. Romantic thinkers preferred progressive civilizations like Greece to older, more stabler ones like Egypt or Rome, he said, and added that racism was prevalent in the 19th century, so honoring an African culture seemed coarse, he said. Romantics decided the Greeks were wrong to believe that Egyptians and Phoenicians had colonized them.

"The Greeks, not the Egyptians, were now being elevated as great architects, authors, sculptors and philosophers," said Bernal. "They just couldn't be trusted to write their own history."

The ancient model had been presented as fact for centuries, he said, but when Bernal re-opened the debate, he was met with hostility. His first volume, published in Britain at the height of the culture wars in 1989, was largely ignored in America. His work has since gained wider attention.

But the Egyptianized Greece presented by Bernal was eventually incorporated into the current model of an Aryan Greece, he said.

"[Classics scholars] finally said that they had always been open to the idea of southern influences but didn't have enough information about the subject," said Bernal, "which is nonsense. ... the issue here is that the Egyptian influence in Greece was dismissed for cultural and ideological reasons," added Bernal. "Many turn to studying Classics to avoid the effects of modern culture and ideology, so this reaction has been a shock."

Sam Warren '07 is a writer intern with the Cornell Chronicle.