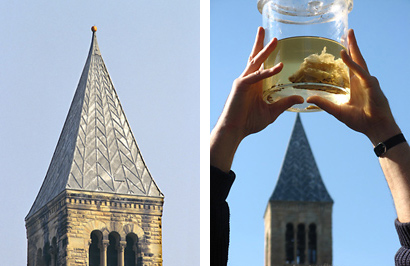 Left: University Photography; Right: Erik Bjarnar
At left, the pumpkin as it appeared atop McGraw Tower in October 1997. At right, the remains of the Cornell pumpkin held aloft in a virtual salute to its former perch of greatness.

October 2007 marks the 10th anniversary of one of the grandest pranks ever perpetrated on the Cornell campus: Somehow, some way, in the dark hours of Oct. 7 or 8 of 1997, someone managed to place a hollowed-out pumpkin atop the McGraw Tower spire.

The rest is history -- and still something of a mystery.

The Cornell pumpkin stunt remains one of the university's most celebrated news events, capturing the fancy of major media during what hardly passed for a slow news month. For instance, there was the phenomenal stock market crash on Oct. 27 and the even more phenomenal rebound the next day, as well as the Million Man March on Washington, D.C., earlier that month.

But the mystery and sheer daring of the stunt -- and the imaginative handling of it by the Cornell community -- drew regular coverage by the national news media. It started with an article in The New York Times, Oct. 27. The Cornell Daily Sun ran a regular "Pumpkin Watch" through Halloween and editor-in-chief Hilary Krieger was interviewed live on the scene by Matt Lauer of the Today Show on Oct. 28.

The Associated Press ran a news story and photo of the pumpkin that appeared in print across the nation. The Cornell News Service handled radio interviews from cities as far away as Minneapolis and Reno, Nev. CNN, MTV and NBC news programs also carried pumpkin reports.

The pumpkin endured most of an Ithaca winter -- and Cornellians around the world with computer access could see it. Oliver Habicht, then with Academic Technology Services in Olin Library, rigged up what was a novelty at the time, something called a webcam that provided 24-hour live images of the gourd on the World Wide Web.

In early March of 1998, Cornell physics majors attempted to get samples of the pumpkin using a weather balloon with a drill attached and a webcam; an ABC network news crew covering that effort also recorded the Cornell Chorus and Glee Club singing a spirited and revised version of the alma mater -- complete with pumpkin lyrics adapted. ABC aired the two-minute, 42-second segment during a Saturday evening news report.

The magic came to an end -- sort of -- in March 1998, when then Provost Don Randel was scheduled to ascend in a crane-hoisted gondola to the top of McGraw Tower to retrieve the famous pumpkin. Workmen testing the crane accidentally bumped the pumpkin and knocked it off the spire. The pumpkin fell about 20 feet to a renovations scaffold. It was intact and unbroken, having been frozen solid by the previous night's low temperatures.

So the fun continued. John Kingsbury, Cornell professor emeritus of plant biology, assembled a group of faculty experts from Cornell's College of Agriculture and Life Sciences to determine whether the object really was a pumpkin. From microscopic slides, videotapes and photographs, the commission formed the highly anticipated conclusion: "Due to the carefully selected composition of this panel, the microscopic details and the gross morphology can be merged into a body of evidence that leads to a single, harmonious conclusion: It is a pumpkin!"

The remains of the desiccated gourd were freeze-dried and placed on display at the visitor's center in Day Hall. But it continued to decay as only biota can. The last extant piece of the gourd sat beside a brain display in the Department of Psychology. Ten years after making international news, it is now on a shelf in the office of Barbara Finlay, the W.R. Kenan Jr. Professor of Psychology. Beside it is a eulogy of sorts written in honor of "Pepo Cucurbita," aka The Cornell Pumpkin.

Ah, but whodunit? That, we still don't know.