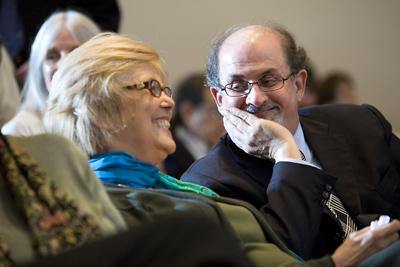 Novelist Salman Rushdie knew how to win over the standing-room-only audience in Uris Auditorium Oct. 18: By paying tribute to Cornell writers. First he described himself as a "Pynchonista," having dined (once) with Thomas Pynchon '59. Then he said he reveres Vladimir Nabokov "and one can only hope to be worthy of his shade."

Asked about the fatwa that called for his death on the grounds of blasphemy against Islam in his 1988 novel "The Satanic Verses," Rushdie deadpanned, "It was not good. Is that enough? I wouldn't recommend it. If it's at all possible to avoid being sentenced to death by the insane dictator of a country far away, you should try."

Conceding his years under threat were "horrible" and "trying," Rushdie said, "The thing that I have taken away from the experience is in fact not to do with how horrible it was. It's in fact to do with the other side of the coin. In those years I found myself at the center of an extraordinary international movement of ordinary people, acting on principles ... who decided as an act of collective will that they didn't feel like being dictated to by this crazy bastard foreigner. It was those people who defended 'The Satanic Verses,' not the great and good."

A Berkeley, Calif., bookstore was pipe bombed, and Rushdie escaped a 1989 assassination attempt when a bomb exploded prematurely in London. "I was shown something about the worst things that human nature is capable of, but also the best, and I choose to remember that."

As he prepared to read from his second novel, "Midnight's Children" (1981), Rushdie said that this must be how the Rolling Stones feel when asked to play "Satisfaction": "It's this book I wrote when I was really a lot younger; I had a lot more energy."

A novel that began as a modest story of childhood "acquired all these other larger historical resonances." The protagonist is born at the moment of India's independence from the United Kingdom, Aug. 15, 1947. Rushdie was born in June of that year.

Rushdie next read from "The Ground Beneath Her Feet" (1999). He said he grew up Muslim in Bombay (now Mumbai), 100 yards away from Farrokh Bulsara, later known as Freddie Mercury, singer of the glam-rock band Queen, who inspired an Indian rock star character in the novel, which concerns "not belonging."

He then read "a silly piece of nonfiction to prove that I was young once. I was absurdly young, 20 years old, in 1967, the year otherwise known as the ]'summer of love.'" The story recalled how Rushdie, on breaks from Cambridge University, stayed in "a place which was somehow by accident the epicenter of the summer of love," upstairs from a "mythic" boutique in London's Kings Road, called Granny Takes a Trip.

Invoking Lennon and Jagger, Rushdie read: "German photographers with platoons of stone-faced models would arrive once or twice a week to use Granny's windows as their backdrop. Granny's had famous windows.

"Granny's people were scornful of the brash boutique-land of the Sloan Square end of the Kings Road. All those Quant haircuts and five-eye snakey boots, all that shiny-plastic-Vidal-Sassoon, England-swings-like-a-pendulum-do palaver. It was almost as uncool as -- Carnaby Street."

Taking questions from the audience, Rushdie reeled off one-liners. How did he acquire his verbal dexterity? "I go to a verbal gym."

Rushdie said he was in the "unusually happy" condition of a writer who has just handed over his latest manuscript -- a novel set in 16th century India and high Renaissance Florence -- to his publisher. "The Enchantress of Florence" was 10 years in the making and will be published in April in the UK but not until fall in the United States. "Amazon," said Rushdie, who studied history rather than literature.