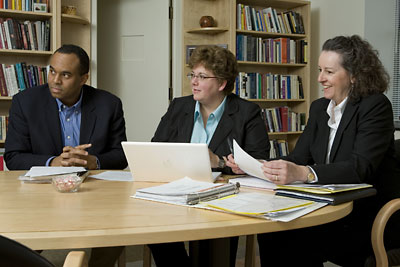 Building on a long history of need-blind admissions and need-based aid, Cornell Provost Carolyn A. Martin announced a sweeping new financial aid initiative, starting next year, to eliminate need-based loans for all undergraduate students from families with income under $75,000, making it possible for new students to graduate debt-free.

The Cornell Board of Trustees also approved a tuition increase of 4.9 percent for undergraduates in the university's endowed colleges -- but a decrease of 10.1 percent for Graduate School students, excluding the professional schools. Overall, the cost of room and board, tuition and mandatory fees for undergraduate students in the endowed colleges will rise to $48,194 from $46,021.

Commenting on the initiative, which is expected to affect approximately 4,500 students, President David J. Skorton stated: "This is a proud day for Cornell and an important day for our current and future students. The approval by the Board of Trustees, under the able leadership of Peter C. Meinig '61, of this initiative, which was spearheaded by Provost Martin, will strengthen the institution's founding mission to provide a superb liberal education across the full range of disciplines to the best and brightest students from all walks of life, regardless of their resources. This new initiative is momentous, extending Cornell's land-grant mandate from 1865."

In unveiling the initiative, Martin said, "My colleagues and I are delighted to make this announcement, capping a yearlong effort to identify the resources and mechanisms that would provide meaningful relief for a significant number of students, who can continue to excel at their academic work and consider a range of careers without the worry of excessive debt at graduation."

Reflecting on similar efforts, Martin added: "Our goal is to provide support that is consistent with what matters to Cornell as an institution. What matters to us is the social good of providing access to education for deserving students, regardless of their ability to pay, and ensuring that their choices after graduation are not constrained by debt. The entire campus benefits from our ability to enroll the most diverse and talented student body. The challenge we and our peers face is to ensure access without undermining the funding model that has allowed higher education in the U.S. to flourish, the partnership that requires investments from state and federal government, philanthropy, universities, families and students. The point is not to make higher education a free good or to shift the responsibility for funding it disproportionately to universities, few of which can afford to eliminate or cap student loans and all of which are being asked to do more and more for our communities and the larger society."

Meinig said: "The new program is the latest step in Cornell's ongoing effort to calibrate its financial aid programs, first instituted in 1872, to the needs of our diverse student body. We are delighted that the university has found its own way to extend greater financial support to our students, without sacrificing the student and family participation upon which we believe a successful academic career depends. That is the Cornell way."

The university expects to spend $116.8 million of its own resources on undergraduate financial aid in 2007-08, 94 percent of which will be spent on grant aid. More than 60 percent of Cornell's undergraduates receive some form of financial aid. Cornell has a greater number and a higher percentage than most of its peers of Pell grant recipients -- students from families that have annual incomes below $45,000. For fall 2007, Cornell enrolled 1,799 Pell grant recipients, representing 13.3 percent of its undergraduate student body.

About the future evolution of the initiative, Vice President for Planning and Budget Carolyn Ainslie said: "While current federal data show that the U.S. median family income is $58,407, it will rise over time. We will review this program on an annual basis to make sure our actions keep pace with changes in family incomes. We will also evaluate the size of the family contribution we require for students from our neediest families."

Deputy Provost David Harris added: "Because Cornell's financial-aid population is larger than the entire undergraduate student bodies of a number of our fellow institutions, the challenge was especially significant here. This initiative will strengthen the economic diversity of our student body and, most importantly, free our students to pursue studies and careers that match their skills and interests, rather than those that ensure they will be able to repay their loans."

At the time of its founding, Cornell University was considered revolutionary because its founder, Ezra Cornell, was committed to access for all students, regardless of economic circumstance, race and gender, declaring, "I would found an institution where any person can find instruction in any study." Together with Cornell's first president, Andrew Dickson White, he opened the institution's doors "to applicants for admission ... at the lowest rates of expense consistent with its welfare and efficiency, and without distinction as to rank, class, previous occupation or locality." Within the first 10 years of operation, the university admitted women and underrepresented minority students and provided financial aid for many students, using a combination of grant, loan and work-study opportunities. The university awarded need-based grants as early as 1879, and its first endowed scholarship fund was created in 1892.