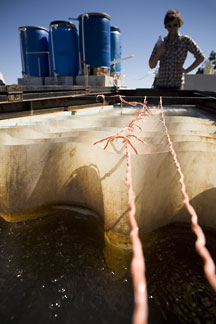 OJOJONA, Honduras -- For 18 Cornell students, mostly civil and environmental engineering majors, who were spending Jan. 4 to 20 in Honduras working on water plants in small villages, it was perhaps the sweetest moment of all witnessing the ceremonial handover of a completed project.

On Jan. 11 a drinking water treatment plant in the Honduran town of Ojojona symbolically changed hands from a local organization, Agua Para el Pueblo (Water for the People), and Cornell engineers to Ojojona's local water board, which expressed its gratitude at finally receiving clean, treated water. The students were present to witness the handing-over ceremony for the plant, which has been running since June 2007.

As part of the AguaClara (Spanish for "clear water") Project Team, led by civil and environmental engineering senior lecturer Monroe Weber-Shirk, the latest group of students visited Honduras to tour potential water plant sites, experience the local culture and visit completed plants, such as in Ojojona and in the village of La 34. It was the fifth project team in as many years that Weber-Shirk has taken to Honduras.

To design these rural plants, students rely exclusively on hydraulic technology, unlike modern plants in the United States and other places that use electricity to power motors.

For some, seeing the Ojojona plant change hands was a key moment of a memorable trip. Previously, the village had only been treating its water -- taken from a wetland source on a mountainside -- with chlorine.

David Railsback '08, who joined the AguaClara Project Team in Honduras for the second time in two years, said he was "psyched" to see that the Ojojona plant was still working. 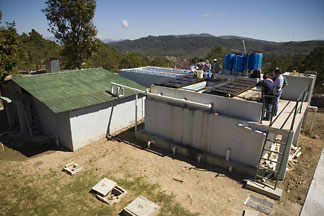 He also said it was important for this year's students to see the plant, and that there's still more work to do there -- such as lowering the turbidity, or cloudiness, of the water.

Weber-Shirk called the ceremony a rite of passage for the local Ojojona plant operators and the community they serve.

"It was in part symbolic, because we had been so heavily involved in operating the plant for the first half-year," Weber-Shirk said. "Agua Para el Pueblo and AguaClara engineers thought it would be useful to have an official transition, marking the time when Ojojona is fully in charge of running the plant."

The AguaClara Project Team is currently focusing its efforts on the nearby town of Tamara for the next water treatment plant. Teaming up again with Agua Para el Pueblo, the students planned most aspects of the plant last fall, incorporating some design improvements compared with previous plants. They are also working on automated design processes to streamline efforts for future plants.