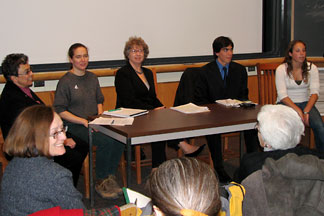 Even if we start reducing emissions soon, temperatures in upstate New York could still rise an average of 4 to 6 degrees Fahrenheit (F) by 2100, and "upstate New York will feel like Washington, D.C.," said Christine Goodale, Cornell assistant professor of ecology, Jan. 31, at Cornell as part of "Focus the Nation," a nationwide teach-in on global warming.

Along with 1,600 other institutions around the United States, Cornell sponsored local events to address climate change. The Cornell events, which took place in Rockefeller and Goldwin Smith halls, were coordinated by students involved with student environmental groups Sustainability Hub and Kyoto NOW! 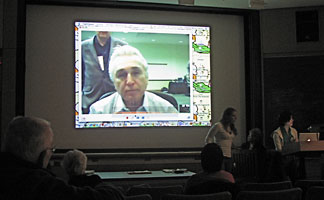 More than 50 professors around campus spent 10 minutes each talking about how global climate change related to their disciplines. And in the evening in three events, panelists -- including Cornell professors and such government leaders as U.S. Rep. Maurice Hinchey -- discussed the science and technology of global warming, local, state and federal government actions, and effective global warming policy.

"We need leadership," said Whitney Larsen '10, a member of Sustainability Hub, who said she literally sent thousands of e-mails in past months to recruit faculty for the teach-in. "Leadership is only going to come when people care enough about the issues to choose leaders who care about change."

"There is one thing we can do pretty immediately to help with [global warming] and that is to vote," said Kerry Cook, a Cornell climatologist and panelist.

Cornell horticulturist Nina Bassuk referred to her work that puts a dollar value on the social benefits of trees; these benefits include conserving energy by providing shade, reducing carbon dioxide, improving air quality and intercepting storm water. She noted that Ithaca has about 11,000 street trees that together provide $1.1 million in ecosystem services on an annual basis.

In discussing how the climate across the Northeast is changing, Goodale noted that if people continue to increase their emissions, temperatures could increase an average of 8 to 12 degrees F, and New York would feel "more like Atlanta" in 100 years. But Natalie Mahowald, earth and atmospheric scientist, warned that "our worst-case scenarios [regarding CO2 emissions trends] have always been wrong ... always too low. These are very alarming signs."

In the roundtable discussion with government leaders, Hinchey said via videoconferencing from Virginia that the federal government increased fuel economy standards last year, requiring cars to average 35 miles per gallon by 2020. While this was the first such increase in more than 30 years, Hinchey said it was not enough.

"I think the best way to [reduce greenhouse gas emissions] is directly from solar energy," he said, noting his support to develop a consortium of small companies focused on creating and improving solar technologies, with the help of Cornell and five other universities.

In the following panel discussion on effective global warming policy, Cornell sociologist Philip McMichael pointed out that using land to produce biofuel instead of crops makes food more expensive. Sustainable Tompkins President Stephen Nicholson focused on local efforts toward sustainable living, such as a reuse center that would divert salvageable materials from the waste stream and resell them or make them available to the community.

Nina Zhang '09 contributed to this report.