Lindsay France/University Photography
The 2008 dragon burns on the Arts Quad. 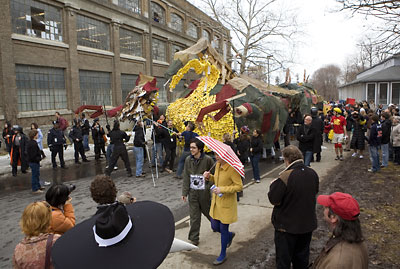 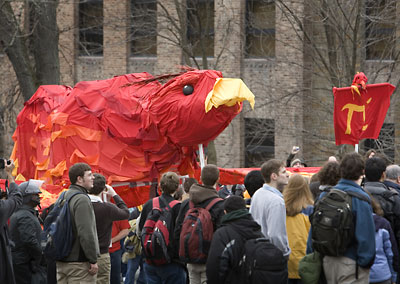 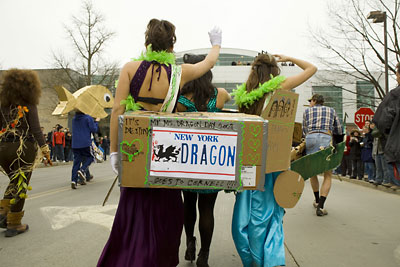 Lindsay France/University Photography
Costumed students accompany the dragon on its trek across campus. 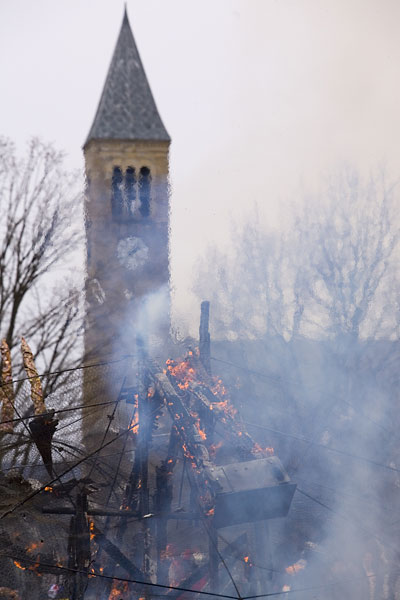 Dragon Day. March 14. Under grim skies the phoenix, a vivid red creature with black eyes, yellow beak and accents of gold and yellow, rises from the ashes of Cornell history.

Armand Awad '11 and his all-freshman team of designers and builders (except for Phil, a senior) with obvious delight resuscitated engineering's response to architecture's dragon, the product of the two schools' decades-long "friendly rivalry."

"We've heard tales from the past of how great the phoenix was, and that it had existed for years and years and years," Awad said. "Long ago, engineering students decided they had had enough of the architecture students having their own holiday."

Meanwhile, the dragon, in a stark departure from the minimalist exoskeletal 2007 version, was distinctly anthropomorphic, with an animated jaw, flapping "hands" and wings atop poles, along with undulating scales of foil and wood. Draped over a wooden frame was the dragon's skin of translucent, loose-woven cloth panels of green, gold and russet; its chest scales, made of cut-up yellow coffee cups, accented with a color scheme reminiscent of medieval coats of arms.

On the parade route, noisy with drummers and youthful whooping, students in costumes included the Spy vs. Spy cartoon characters; three young men dressed as sperm accompanied by students dressed as an egg and, in a nod to safe sexual practice, a young man encased in a double-layer condom; and the usual assortment of face-painted, unplaceable, vaguely bacchanalian figures. Students sporting grass beards and other wearable flora periodically shouted, "Landscape architecture! Yeah!"

The Phoenix Society, founded in the mid-1980s, has branched out into other creations that have sallied forth from the Engineering Quad on Dragon Day: a Viking longboat, a cobra, a penguin and a knight among them. "We have a creative side, too," said a young woman engineer before disappearing beneath the phoenix, presumably to make last-minute adjustments.

"We just want to represent the engineering school and say, 'We are here,'" asserted Awad, who with classmates has been designing the mythological bird since the fall semester. "The phoenix is traditionally not burned. It will be dismantled. We're going to try to save the head and put it up in Duffield."

During the brief but strangely intense clash of the two creatures at the Engineering Quad entrance, the dragon seemed to try to nip at, or perhaps smooch, the phoenix. The two titans parted after a few awkward moments.

Later, on the Arts Quad, its barren trees strewn with toilet paper and students, screams of "Burn it! Burn it!" filled the air. Torches lit the hapless dragon, onto which had been heaped debris from floats and costumes from the parade route.

Amid much roaring, red flames and black smoke shot into the sky as a wave of heat hit the crowd lining the cordoned-off immolation. Remarked one awestruck student, in an apparent reference to a funeral pyre, "It's like being in India, dude!" Hundreds of cell phones and cameras held overhead snapped the fiery tableau.

And then, even as the remnants of the dragon hung in the dark sky, talk turned to packing for spring break and evacuating Ithaca.