Decks produced by Comet Skateboards look a little different these days. Instead of slick opaque finishes in bright colors, they have a transparent topcoat that shows the wood core below -- either sustainably harvested maple, poplar or bamboo.

What looks slightly different on the surface translates into a novel characteristic -- the boards are completely biodegradable. When they are no longer used for skimming curves or jumping curbs, they can be ground up and turned into compost.

The innovation is thanks to the research of Anil Netravali, professor of fiber science and apparel design in Cornell's College of Human Ecology, who has developed biodegradable composites made entirely from plant fiber and a resin derived from soy protein. They are much more environmentally friendly than traditional composites, which are typically made of petroleum-based products and can't be reused or broken down at the end of their life cycle. 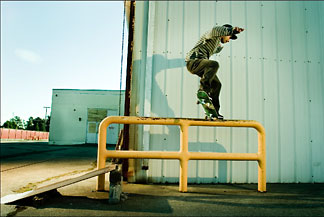 In 2006 Netravali co-founded a company called e2e Materials LLC to sell products based on Netravali's research. And that caught the eye of Jason Salfi '93, a co-founder of Comet Skateboards.

In fact, Salfi was so excited about the prospect of making eco-friendly skateboards that he moved Comet's manufacturing operation to Ithaca last fall.

"For us, it's a commitment to the environment," Salfi said. "This product is a great alternative to the glues that most other companies are using. Sharing space with e2e allows us to develop the technology a lot faster together."

That's exciting news in terms of local business development. To start, Comet Skateboards has brought six new jobs to the area. And expanding its product line could mean many more jobs in the future.

In addition, the move is hard evidence that technology developed at Cornell can generate local jobs -- a phenomenon that could give Ithaca a boost for years to come.

The business community has signaled it believes e2e Materials can be an economic powerhouse. Last year, the company won the $100,000 grand prize in the EssentialConnections.org Emerging Business Competition, which recognizes the most growth-oriented emerging business in central New York. The award is sponsored by the Metropolitan Development Association of Syracuse and Central New York, the region's primary business leadership organization.

Next on the horizon, e2e is working on an application to replace particleboard, the base materials for much of today's low-cost furniture. Current materials are made with formaldehyde, a toxin that slowly releases into the environment. It's also made in large sheets and then cut to size, leaving a lot of waste.

In addition to being biodegradable, e2e's material is three times stronger than products currently on the market. It doesn't release toxins into the air, and it is formed to the exact size and shape needed, reducing waste and manufacturing costs.

The company is still working on a deal that will launch the new particleboard in the marketplace. In the meantime, the company is working with Comet Skateboards on new products and looking at other applications, as well.

"In a word, business is good," Netravali said.

Sheri Hall is assistant communications director for the College of Human Ecology.