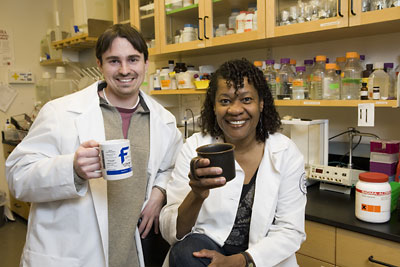 Lindsay France/University Photo
Mice given caffeinated water -- in doses equivalent to a person drinking six to eight cups of coffee a day -- were protected from developing an MS-like disease called experimental autoimmune encephalomyelitis, according to Cornell researchers Jeffrey Mills, left, and Margaret Bynoe.

High quantities of caffeine may do more than just keep people awake. The stimulant may one day offer researchers a way to prevent multiple sclerosis.

Mice given caffeinated water — in doses equivalent to a person drinking six to eight cups of coffee a day — were protected from developing an MS-like disease called experimental autoimmune encephalomyelitis (EAE), according to Cornell researchers.

The findings were presented April 7 at the Experimental Biology 2008 meeting, which is part of the American Association of Immunologists 95th Annual Meeting in San Diego.

However, the researchers cautioned against drinking large amounts of coffee to treat MS, as more studies are needed to understand how caffeine blocks receptors that play a role in the autoimmune disease.

MS is a disease in which the immune system attacks and damages nerves in the brain and spinal cord, resulting in paralysis and impairment in speech, vision and mental function.

"We're not advocating large quantities of caffeine to prevent MS," said Jeffrey Mills, the study's lead author and a postdoctoral associate with senior author and principal investigator Margaret Bynoe, associate professor of microbiology and immunology at Cornell's College of Veterinary Medicine. "We know that caffeine suppresses MS-like effects in mice with EAE."

In mice and humans, when inflammation occurs in the brain, damaged cells signal an immune response by releasing ATP (adenosine 5'-triphosphate), which gets broken down into adenosine. The compound is important in many biochemical processes, including energy transfer and sleeping. The adenosine molecule begins to degrade seconds after its creation, which means the body must use it very near where it is made.

The researchers reported that when adenosine binds to one of four types of adenosine receptors in an area of the brain called the choroid plexus, channels open up that allow immune cells known as T-lymphocytes to enter the brain. In EAE in mice and in MS in humans, these T-lymphocytes damage insulating fats called myelin that surround nerves, which leads to MS-like symptoms.

The researchers used genetically engineered mice (developed by co-author Linda Thompson at the Oklahoma Medical Research Foundation) to investigate whether adenosine and its receptors were truly responsible for EAE. The engineered mice lacked an adenosine-synthesizing enzyme called CD73. When tested, these mice had fewer lymphocytes enter the brain and failed to develop EAE. But, using immune cells from these mice, the researchers determined that CD73 plays a role in EAE only because it helps create adenosine outside the choroid plexus.

To test their hypothesis, the researchers turned to caffeine, which is known to block adenosine receptors. The caffeine prevented lymphocytes from entering the brain and causing nerve damage in mice with EAE. In the study, mice that drank highly caffeinated water did not develop MS-like symptoms.

"This study could lead to new therapeutic intervention to use adenosine receptor blockers including caffeine," said Bynoe. There is currently no way to detect MS in people prior to the onset of symptoms. Although caffeine would not provide a cure, one day it could lead to new ways of protecting against relapses of symptoms, she said.