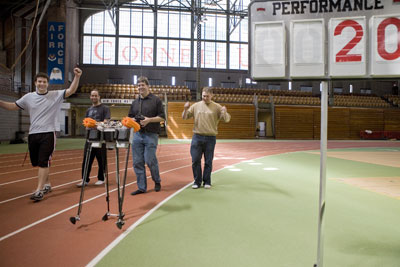 Lindsay France/University Photography
The celebration begins on lap 20 (2.1 km), as the Cornell Ranger breaks the distance record for a walking robot, April 3 in Barton Hall. Accompanying the Ranger are, from left, engineering graduate students Andrey Turovsky and Greg Stiesberg; Jason Cortell, manager of the Biorobotics and Locomotion Lab; and Bram Hendriksen, a visiting graduate student from the Netherlands.

We're not sure what brand of batteries it was using, but the Cornell Ranger robot just kept going and going April 3 when it set an unofficial world record by walking nonstop for 45 laps -- a little over 9 kilometers or 5.6 miles -- around the Barton Hall running track.

Developed by a team of students working with Andy Ruina, Cornell professor of theoretical and applied mechanics, the robot walked (and walked) until it finally stopped and fell backward, perhaps because its battery ran down. "We need to do some careful analysis to find out for sure," said Greg Stiesberg, a graduate student on the team.

An earlier version of the same robot had already set a record by free-walking a bit over 1 kilometer, about .62 miles. (Another robot has walked 2.5 kilometers [1.55 miles] on a treadmill, Ruina noted. A six-legged robot has walked a bit more than 2 kilometers, and there's some debate over whether or not that counts.)

There are no rules for such records, Ruina admits, and the Guinness people were not involved. "There's a lot of rigmarole with that," he explained. The event, he said, was to show off the machine's energy efficiency. Unlike other walking robots that use motors to control every movement, the Ranger emulates human walking, using gravity to help swing its legs forward.

Standing still, the robot looks a bit like a tall sawhorse; walking, it suggests a human on crutches, alternately swinging forward two outside legs and then two inside ones. There are no knees, but at the ends of the legs are feet that can be tipped up and down, so that the robot pushes off with its toes, then tilts its feet upward to land on the heels as it brings its legs forward.

The goal of the research, Ruina said, is not only to advance robotics but also to learn more about the mechanics of walking. The information could be applied to rehabilitation and prosthetics for humans and even to improving athletic performance.

Ruina's lab has built several walking robots of various designs. A model with flexible knees, designed to closely imitate human walking, consumed energy per unit weight and distance comparable to a human walker. In contrast, Ruina estimates that the well-known Honda Asimo uses at least 10 times as much energy as a human when walking.

Ironically, Ruina was not present to witness the record-breaking event. By phone, from a conference on locomotion in Columbus, Ohio, he commented, "We've just moved into this world of electromechanical devices, and to make something this robust is a big achievement. We've learned tons about what it takes to make walking work."