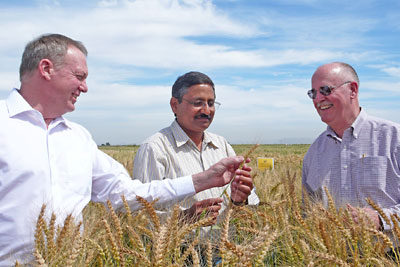 Linda McCandless
Rick Ward, left, coordinator of the Durable Rust Resistance in Wheat (DRRW) project, talks with Ravi Singh, center, distinguished professor and wheat breeder at CIMMYT, and Ronnie Coffman, DRRW project director, about some of the most promising Ug99 resistant varietes of wheat at CIMMYT, in Obregon, Mexico, on April 2.

Cornell has been awarded a $26.8 million grant from the Bill & Melinda Gates Foundation to launch a broad-based global partnership to combat stem rust, a deadly wheat disease that poses a serious threat to global food security.

Wheat, which is one of the world's primary food staples, accounts for about 30 percent of the world's production of grain crops. Scientists estimate that 90 percent of all wheat varieties planted around the globe are susceptible to the virulent new wheat stem rust type, known as Ug99. More than 50 million small-scale farmers in India rely on wheat for their food and income; other vulnerable regions include Pakistan, East Africa, China, the Middle East and North Africa.

The Gates Foundation-funded partnership, the new Durable Rust Resistance in Wheat project, will bring together 15 institutions to combat the emergence of deadly new variants of stem rust that can spread quickly, reducing healthy wheat to broken, shriveled stems. The partners will focus on developing improved rust-resistant wheat varieties to protect resource-poor farmers as well as consumers from catastrophic crop losses.

Ronnie Coffman, a Cornell professor of plant breeding who is director of international programs at Cornell's College of Agriculture and Life Sciences, announced the grant at a meeting at wheat research facilities in northwest Mexico used by the International Maize and Wheat Improvement Center (CIMMYT). Coffman will direct the consortium of global partners while Rick Ward, previously a wheat breeder with CIMMYT and Michigan State University, has been hired by Cornell as the project coordinator. 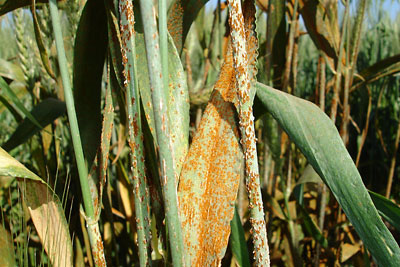 "The rust pathogens recognize no political boundaries, and their spores need no passport to travel thousands of miles in the jet streams. Containing these deadly enemies of the wheat crop requires alert and active scientists, strong international research networks and effective seed supply programs," said Nobel laureate Norman E. Borlaug, who developed the "green revolution" wheats beginning in the 1940s and is credited with bringing radical change to world agriculture and saving hundreds of millions of lives.

Borlaug, who was in Mexico for the grant announcement, continued, "The new wheat project is a critical component in building an effective research and development response to the current stem rust threat, and can help avert a global rust pandemic that can rob tens of millions of tons from production."

World awareness of the highly feared wheat disease is largely due to Borlaug's advocacy, most recently through the Borlaug Global Rust Initiative, which will work closely with the new wheat project.

"Resource-poor farmers are particularly vulnerable to wheat stem disease, which has the potential to wipe out entire crops," said Rajiv Shah, director of agricultural development for the Gates Foundation's Global Development Program. "We're excited about the potential of this partnership to catalyze the increased global investments necessary to fight this powerful disease."

"Farmers need access to wheat varieties that can resist the new type of wheat stem rust, especially in developing nations where reliance on wheat is high and budgets for fungicides almost nonexistent," said Coffman.

The Gates Foundation has to date committed more than $700 million in grants as part of a broad agricultural development strategy aimed at providing millions of small farmers in the developing world with tools and opportunities to boost their productivity, increase their incomes and build better lives.

For more information about the new project, see http://www.wheatrust.cornell.edu.

As part of the Durable Rust Resistance in Wheat project, based at Cornell, an international team of researchers has undertaken a set of objectives to deal with the enormous task of breeding new rust-resistant wheat varieties and protecting resource-poor farmers in developing countries from losing crops to the virulent fungus that has recently reared its ugly head.

The wheat project is a partnership of 16 institutions in 13 countries and is funded by a three-year, $28.6 million grant from the Bill & Melinda Gates Foundation.

Some of its other main objectives include: