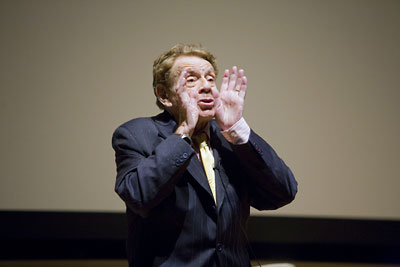 Opening his show at the Statler Auditorium April 2 before a packed house, 81-year-old comic actor Jerry Stiller kvetched about the hardships of schlepping himself from his Upper West Side apartment to Ithaca.

First, he said, he was frisked and had to take his shoes off at LaGuardia, before landing at "Tompkins Residential Airport. Picked up by Rabbi Eddie [Rosenthal] in a Suburban. Take a left on Warren, a right on Route 13, past Triphammer, car wash, over that bridge that shakes a little bit. I look over at Collegetown.

"I was on a journey. I'm trying to find myself. So I came to Cornell to make a discovery about myself, and what did I discover? Collegetown Bagels and Lou's box lunch!"

After service in the World War II, Stiller, an aspiring actor, studied theater at Syracuse University. Returning home to New York City, he met actress Anne Meara, to whom he has been married for 53 years. Acting jobs were scarce. The couple developed a comedy act, Stiller and Meara, riffing on their Jewish-Irish Catholic backgrounds, and in the late 1940s made their first of 36 appearances on the "Ed Sullivan Show," which launched them to fame.

Stiller showed video clips from the Sullivan show, along with movies and television shows in which he and his wife have appeared. The comedy act's shtick ran like this:

Meara: "You matzo head, what do you know?"

Stiller: "You, you shillelagh shiksa, you!"

Meara: "What! What did you call me? Oh, you're something you are, you Bensonhurst blintz, you!"

Stiller: "You! You meshuggana Mother McCree, you!"

They found themselves on the Vegas Strip working with the greats of the time: the Supremes, Count Basie, Nichols and May, Shelley Berman, Mike Douglas.

In recent years Stiller has found renewed success playing volatile, irascible men forever on the verge of apoplexy on the situation comedies "Seinfeld" and "King of Queens."

Quoth Stiller on the ethnicity of his "Seinfeld" character: "How does a family that eats kasha, knishes and kneidelach have the name Costanza? I always tell people we were a Jewish family in the Witness Protection Program." Of his parents: "I was the product of a mixed marriage. My father was a Galitzianer and my mother was a Litvak. They didn't get along. It was like one was a Sunni and the other was a Shiite."

Stiller's father was "an unemployed cab driver" who during the Great Depression took his son to vaudeville shows. If "a comedian was terrible," the senior Stiller "would scream from the audience, 'Faker! Faker!' Of course, this put me into therapy for a number of years," Stiller reflected.

As a youth Stiller once accompanied a classmate named Annie Goldhaber home from school, but when he revealed to her his theatrical ambitions, he never saw her again. Years later former New York Gov. Eliot Spitzer approached Stiller and said, "Jerry, did you know you carried my mother's books home from school?"

Stiller invited his daughter, Amy, a stand-up comic and actress, to take the stage. A voluble red-haired woman, Amy Stiller instantly launched into a reminiscence of spending the Jewish holidays with her Jamaican housekeeper and a set piece involving her attempt to reach out to a Latino furniture deliverer from Ikea.

To end his show, Stiller invited two students from the audience to join him in re-enacting a legendary scene from "Seinfeld." On stools, the three pretended to be in a car, Stiller in the back, pleading for more legroom. To cope with the cramped conditions Stiller, in an aggrieved howl of desperation, hopelessly invoked a mantra to calm himself: