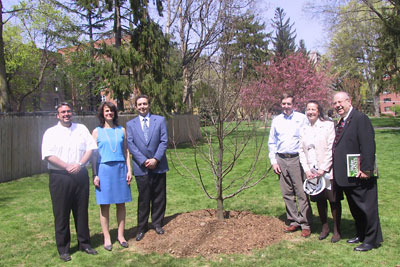 The community-based research and educational program will attempt to develop blight-resistant characteristics in the American chestnut variety via a partnership of Cornell Cooperative Extension (CCE) of Westchester County; Elisabeth Radow '78, who initiated the partnership to establish a living tribute to Cornell; Marshal Case '64, president of the American Chestnut Foundation (ACF); Cornell alumni; and the city of White Plains.

At a commemoration ceremony in the J. Harvey Turnure Memorial Park, April 24, where the tree was planted, the Westchester community honored Ezra Cornell's vision, legacy and dedication to the pursuit of hands-on, practical knowledge embodied in Cornell's land-grant mission.

Through research and breeding, the ACF works to restore the American chestnut tree to the northeastern United States. The tree has been endangered from chestnut blight, a lethal fungus infestation, since the early part of the 20th century. Chestnut blight not only altered the landscape of the region's woodlands but also severely impacted rural economies, which depended on the American chestnut's nut and lumber harvests.

The ACF estimates that before the blight 4 billion chestnut trees covered 200 million acres of woodlands.

"This tree represents how positive forces can bring people together," said Radow, who acted as co-sponsor with the ACF to bring the Virginia-born American chestnut tree to White Plains. The tree is a product of the foundation's blight-resistant breeding program.

CCE also seeks to educate the Westchester population, particularly its young people, about the American chestnut. A three-panel exhibition installed near the chestnut tree explains the history and importance of the variety.

"Thousands of people visit the park every year," said Sacks. "The tree will be widely viewed."