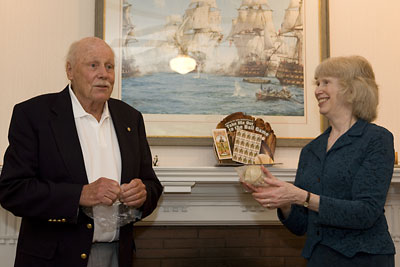 Recent generations may not know how to spot a "piker" or where to find Theodore Zinck's, but the song has resonated with Cornellians for more than 100 years:

Give my regards to Davy
Remember me to Tee Fee Crane.
Tell all the pikers on the hill
that I'll be back again.
Tell them just how I busted
lapping up the high highball.
We'll all have drinks at Theodore Zinck's
when I get back next fall.*

The "Davy" in question is registrar David Fletcher Hoy (Class of 1891, M.S. '93), an alumnus who devoted much of his life to serving as one of Cornell's first administrators. Notorious for his strict sense of discipline, Hoy was also a bench coach and enthusiastic supporter of the university's baseball program. Hoy Field is named in his honor.

Hoy threw out the first pitch when the field was inaugurated in 1922, and that baseball returned to Cornell during a small ceremony July 23, when Hoy's grandson presented the ball to University Archivist Elaine Engst.

"I think it belongs here," David Fletcher Hoy III said. "I'm glad [it was] given to a place where it can be properly taken care of."

The baseball -- which traveled to the Ithaca event in the purse of Hoy's wife, Anne -- had been locked in a safe in the family's home in Camden, Maine. It was also protected, Hoy said, by a "handmade baggie dating back to 1930. My father encapsulated it, sealed it with a match at the dining room table."

As he handed the baseball to Engst, the 82-year-old Hoy joked, "I'll let you handle that now." The ball will be preserved and eventually displayed in Kroch Library. 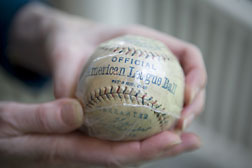 "Baseball is having a bit of a renaissance at Cornell," Engst said, noting that the summertime event was well-timed for baseball season. She also related the story of the field being named for the registrar: "At a meeting of the athletic council, they sent him out of the room for a minute. When he came back, they told him they were naming the newly completed baseball field for him."

The ceremony was held at the registrar's former home on Fall Creek Drive and hosted by its current resident, Sara Beth Canaday. About 30 people attended, including Hoy's great-grandson John Hoy, University Librarian Anne R. Kenney and Dean of Students Kent L. Hubbell. Also in attendance was a representative from Cornell's secret honor society, Quill & Dagger, to which Hoy belonged.

Gwen Glazer is a writer at Cornell University Library.

* A piker is a freshman. Theodore Zinck's was a bar and longtime institution in downtown Ithaca. Tee Fee Crane was Thomas Frederick Crane, a professor, dean and acting president. "Busted" refers to being dismissed for academic failure.