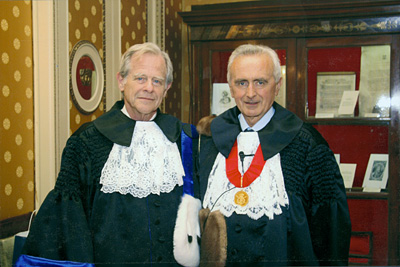 Provided
Lowi, left, receives an honorary doctorate from the University of Pavia in Italy Sept. 5.

In Boston, he received the 2008 James Madison Award and delivered the Madison lecture at the American Political Science Association. Then in Italy, he was awarded an honorary doctorate from the University of Pavia.

The Madison award is the field's top accolade. Given every three years, it recognizes the lifetime contributions of an eminent political scientist. "It was my turn, I guess," said the 77-year-old Lowi, Cornell's John L. Senior Professor of American Institutions, who has been voted by his peers as one of the most influential political scholars of the modern era. "I outlived the competition."

Lowi worked for months on his Madison speech. "You're expected to give a speech that has a larger and more lasting argument than simply a report on your research," he said in the rapid-fire drawl familiar to generations of Cornell students. "I gave a paper on constitutional issues that fit into James Madison's major concerns."

American empire: "There's a certain amount of inspiration in what makes a successful regime, and democracies are usually short-lived. I think empire was over after the Vietnam War, but now we're a paper tiger for real."

George W. Bush: "He was a person of so little learning that he was susceptible to a passionate, well-thought-out argument. But he never asked, 'What examples are contrary to that?' His mind was a vessel filled with the fluids of theory-makers like [Vice President Dick] Cheney and [former deputy secretary of defense Paul] Wolfowitz. I don't believe Bush was an evil man. I believe he was an empty man."

Ann Coulter '84, conservative polemicist: "That name raises my blood pressure. If I had had her as a student, I'd be ashamed of myself."

Israel: "It destroyed democracy a long time ago. You cannot have a 'religious republic,' Jewish or Muslim. That's contrary to an ordered liberty."

Liberalism: "I'm a liberal, but I was the first liberal to say, 'My god, you liberals are going crazy.'"

The presidency: "Each administration -- Republican or Democratic -- has sought 'constitutional dictatorship' during times of danger … When you're operating on a theory that you're always in danger, that gives the presidency further 'legitimacy' to exercise dictatorial power: warrantless searches, surveillance, torture, no regard for form, total regard for profiling, avoidance of government rules by outsourcing."

Antonin Scalia, "originalist" Supreme Court justice: "He has the audacity to tell us what [the founders] intended … He expresses his reverence for the original Constitution, but he pays no attention to the lack of respect that [the Supreme Court] has shown the Constitution over the years. I hate his position, not because it's wrong, but because he's not loyal to it. Just consider the butchering of the 14th Amendment to get George [W.] Bush elected."

Paul Wolfowitz '65, neoconservative architect of the Bush foreign policy: "He took one class from me as an undergrad; he was a brilliant, sweet kid. I caught up with him again at University of Chicago, but he didn't have much to do with me because his interests were philosophic and international. I knew the kind of philosophy he was picking up from Leo Strauss and Albert Wohlstetter, but I was shocked at the extent to which he would go for this notion of democratic imperialism. And despite the affection I had for him from Cornell, I cannot get the suspicion out of my head that while he was working up through [the Department of] Defense and reaching the top of the diplomatic hierarchy, he was a CIA plant."

For the Italian audience, Lowi turned to globalization's effect on nation states. The last American in the social sciences to receive an honorary doctorate from Pavia (founded in 1361) was the late Nobel laureate in economics Herbert Simon more than 25 years ago. Departing momentarily from the gravitas of the occasion, Lowi told his audience that his cap was too small. "I said, 'I apologize, my head grew larger after you gave me this award.'"

Despite his centrality to the field of political science, the influence of his ideas and books, and the generations of Cornell students he has taught, Lowi maintains that he feels "marginal." "A lot of those citations that mark me as a highly visible fella were adversarial, often hostile. What I did was make myself an enormous target."

His perception of himself as an outsider derives in part from growing up in Gadsden, Ala., one of six children of a "very impecunious" engineer-turned-small-businessman father. "I was in the middle; that's why I'm so crazy," joked Lowi, who hails from a Jewish family that settled in the south before the Civil War.

"I have this persistent pride in being marginal," Lowi said. "I'd rather have played football than learn Hebrew. Although our exposure to ritual was minimal, we were aware, if not very observant. Being of the Reform persuasion, our mother played the organ for all of the services for over 50 years. I've remained marginal among Jews and also among scholars. It strengthens my observational acuity."

Twice Lowi was tempted to go into politics. He was a speech writer and analyst for an unsuccessful Alabama gubernatorial candidate in 1958; and in 1964 he wrote "The Pursuit of Justice," a book commissioned by Robert Kennedy, who was resigning as attorney general to run for the Senate. "I was tempted to stay on, but preferred being an autonomous scholar," said Lowi. "Never again did I do any ghost writing."

Lowi joined the Cornell faculty in 1959. He received his doctorate from Yale 18 months later. An oboe player, he joined the university orchestra and also played in a recorder consort with Mike Abrams. It was months before he learned that Mike Abrams was M.H. Abrams, founder and editor of the "Norton Anthology of English Literature" and the renowned Class of 1916 Professor of English Literature. Abrams later inspired Isaac Kramnick and Lowi to create and publish the "Norton Anthology of American Political Thought."

Recruited to the University of Chicago in 1965, he returned to Cornell in 1972 as successor to Clinton Rossiter in the John L. Senior chair. The 1969 publication of his "The End of Liberalism," still in print, had raised his stock. "I've spent all my life trying to deserve this chair," said Lowi, who continues to teach two large introductory undergraduate classes, produce scholarly work and travel the world as a speaker.

As Americans cast off formality, Lowi believes, so have they eroded the Constitution framers' vision of American government. "America has no history," he said. "It's part virtue and part problem that we don't recognize habits and expectations and formalities. And that means constitutions also. We take the Constitution much too lightly; we're just not very respectful of forms."

This failure to observe form leads to America's failure to hold true to the founders' principles, in Lowi's view. His Madison speech detailed "a history of illegitimacy" of more than two centuries of subtle and not so subtle crippling of the Constitution and of constitutionalism itself. "The president believes that he has just as much right as the Court to interpret the Constitution. And George [W.] Bush has taken that literally, with 'signing statements,' which can virtually rewrite a statute coming over from Congress, which is supposed to be vetoed or 'faithfully executed' -- as prescribed by Article II. Bush has been setting his own damn conditions -- a virtual judge in his own cause; and to Madison, that is the essence of tyranny. Lack of respect for form."

The distance between form and reality is, Lowi contends, the very definition of illegitimacy. In his Madison address, he argued that illegitimacy is responsible for the decline and replacement of at least five unacknowledged American republics since the nation's founding: the Articles of Confederation; the Constitution of 1789; the Civil War and the 14th Amendment (nationalizing citizenship); the Roosevelt era, culminating with the social policies of the 1960s; "And with the accession of George W. Bush as the culmination of changes made by Reagan, we get the government of the transcendent presidency. That's our fifth republic."

Cornell professors Ted Lowi, Joel Silbey, Fred Logevall, Elizabeth Sanders and Richard Booth will tackle "Now That They've Won, What Will They Do? Policy and Politics in the New Administration" Nov. 5 at 4:45 p.m. in Lewis Auditorium, Goldwin Smith Hall.

Lowi relishes the role of provocateur. "I like being a son of a bitch," he said. "I got good responses to the speech -- some eager to tear me apart, a few delighted and others surprised. When it comes to laws and constitutions, you can easily undermine your own country by being too casual about it -- as in, 'What's a constitution among friends?'"

Lowi's ire spills onto both parties and onto the two-party system. A longtime proponent of a multiparty system for the United States, he laments the cowardice of Congress in ceding power to presidents and the failure of Americans to recognize and denounce -- to say nothing of rebel against -- the accumulation of executive power.

"It was always a superstition or a dream that we could replace Pax Britannica with Pax Americana, " Lowi said. "We're the Lone Ranger or Superman. And peace, we have believed, would be permanent when we convert all countries to democracy, because democracies never go to war with each other. We didn't learn from Vietnam that you cannot impose new regimes on old countries. America is too young to have a history, and yet, we're going to impose Western, liberal, Christian, capitalist values on ancient people and cultures?

"Hubris is a concept a young Greece invented."