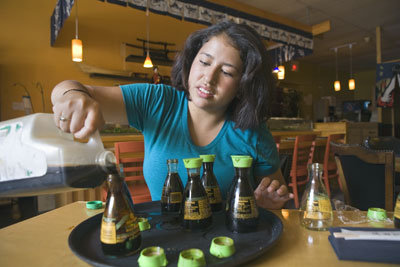 Lindsay France/University Photography
Evelyn Ambriz '11, a development sociology major in the College of Agriculture and Life Sciences, is just one of thousands of Cornell students who have benefited from the university's new financial aid program. According to enhanced aid parameters just announced, starting in fall 2009 Ambriz may be eligible for a package with no student loan debt and no parental contribution toward the cost of her education.

On the heels of an initiative announced just 10 months ago that greatly reduced student loan burdens, Cornell has announced that it will further bolster its financial aid program for undergraduate students by eliminating parental contribution for family incomes below $60,000, and further reducing student loans.

Together with work-study and other grant programs already in place, Cornell's neediest students will graduate debt free.

"In the current volatile and difficult economic circumstances, many current and prospective college students and their families are concerned about the affordability of a university education. Particularly at this unsettling time, Cornell must open its doors even wider," said President David J. Skorton.

"Our new policy will allow students, despite the current economic conditions, to be able to choose Cornell and to thrive here. With these enhancements, we will have the best chance each year to attract the strongest class," said Interim Provost David Harris.

The three components of the new financial aid initiative are:

The new initiative will allow many Cornell students to graduate debt free and relieve the least economically advantaged parents of having to make a contribution. This initiative provides generous benefits to students from low/middle income families, but also addresses the needs of all families who qualify for need-based financial aid.

Like many other universities, Cornell has had to respond to the current economic downturn, but the university has maintained its commitment to supporting a need-based financial aid program.

"Ensuring that Cornell remains accessible to students from diverse economic backgrounds remains one of our top priorities," said Doris Davis, associate provost for admissions and enrollment.

When considering how to enhance financial aid, Cornell has a unique set of challenges, Harris said. Not only is Cornell larger than many of its peers, it is also more socio-economically diverse. In fall 2007, Cornell had 1,863 undergraduates receiving Pell Grants -- federal grants for families with less than $45,000 income -- which is about 13.8 percent of Cornell's undergraduates. Harris pointed out that this is roughly the same number of Pell Grant recipients as are enrolled at Yale, Princeton and Harvard combined.

Cornell plans to spend $138.9 million of its own resources on undergraduate financial aid in 2008-09, 97 percent of which will be spent on grant aid that does not have to be repaid to the institution.