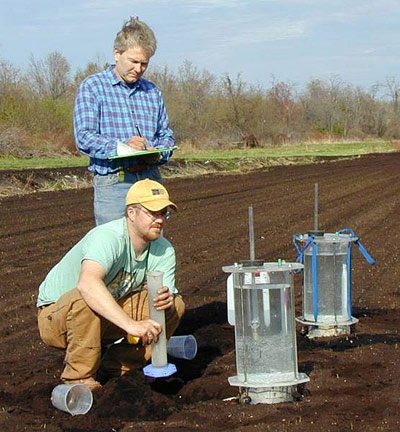 More than 50 conservationists, policymakers, industry leaders and other stakeholders from across New York state were in Ithaca Dec. 8 to hear from Cornell experts on how climate change affects state ecosystems and how best to respond to a warming planet.

The session was the first event funded by a two-year New York State Energy Research and Development Authority (NYSERDA) grant to unite private and public leaders in working toward shared solutions to environmental change.

"This is a first-of-its-kind meeting to help stakeholders in New York develop the tools to cope with climate change," said David Wolfe, Cornell professor of horticulture, who organized the gathering. "We want to understand how climate change affects ecosystems and see it through the eyes of people who live with its effects every day."

The group heard from six Cornell professors and extension associates about how climate change shapes New York ecosystems through its effects on state flora and fauna -- from the rise of invasive plant and animal species to its harmful effects on coldwater fish. The researchers noted potential future threats and opportunities if carbon emissions grow and the planet continues to warm.

Several researchers pointed out that the effects of climate change might not be universally bad. Farmers could benefit from a longer growing season, for instance, and certain species could thrive under warmer temperatures. But they also painted a picture of great upheaval to New York ecosystems if greenhouse gas emissions continue unabated.

Later, the group discussed the vulnerabilities and opportunities climate change has created in New York, as well as possible shared adaptation strategies. The stakeholders offered input about their information needs and areas where Cornell professors could focus their research. Early feedback suggests a need for more thorough baseline data and a comprehensive long-term program to monitor changes in the health and status of state forests, grasslands and other natural ecosystems.

During the next two years, Wolfe and his collaborators will continue soliciting the group to develop focused case studies in which to document climate change impacts and suggest remedies. Upon completion, the results of the NYSERDA project will be made public with a report and Web site to guide lawmakers and public and private groups as they respond to climate change.

"This is exciting because, unlike the past, we're not just trying to convince people that climate change is occurring," Wolfe said. "Instead we're meeting directly with policymakers and people on the ground to determine what to do about it."

Ted Boscia is a staff writer for the College of Agriculture and Life Sciences.