Riché Richardson, associate professor of Africana studies, returned Jan. 17 from a week in Paris as a cultural envoy to France sponsored by the U.S. Embassy. She gave a series of lectures in the city, where her art quilts depicting Barack Obama, Josephine Baker and Simone de Beauvoir were being exhibited.

The visit was in conjunction with the Paris opening of the traveling quilt exhibition, "Un patchwork de cultures: une exposition itinérante de la Louisiane vers la France." Richardson's quilts were on display at locations including the U.S. ambassador's residence and at City Hall 5 (in Paris's fifth district).

Richardson gave talks at various schools and exhibition spaces and at the embassy and the ambassador's residence. She met over lunch Jan. 13 with a newly formed diversity group at the U.S. Embassy, where she gave a talk on "Southern Horrors, Global Terrors: Hurricane Katrina and Inequities of Race and Gender in the U.S.," "which served as a foundation for an in-depth dialogue on diversity," she said. 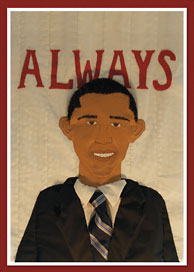 "The very first day, I spoke at Martin Luther King High School," she said. "They are a very artistically energetic community. I focused on themes related to art and education, using these resources and my own experience with art history. I talked about the difference that art literacy can make, as a gateway to the humanities."

Given the subject of her most recent quilt, "Obama Time: Always," many students she met engaged her in conversations about the then president-elect, citizenship and exclusion in France, she said.

"They made me think about how I function as an artist and as a role model," she said. "They were interested in drawing on aspects of the African-American experience to underscore the sense of alienation they feel inside the French system."

Richardson also gave a gallery talk on the legacy of Rosa Parks, St. Jude Educational Institute and the Youth Mission in Montgomery for 25 vocational school students; a talk on "The 'Race Card' Myth, Diversity and Civility in Academia" for a group of engineering students; participated in an exhibit tour and quilting workshop with a Parisian underprivileged women's group; gave a talk for African-American history students about Rosa Parks and the civil rights movement; and delivered a lecture on "Black Masculinity and the U.S. South" for American studies scholars. 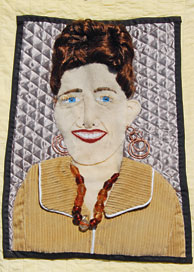 "It has helped to transform me, about how I conceptualize my teaching and how I make my art," Richardson said of her cultural envoy experience.

A native of Montgomery, Ala., Richardson came to Cornell in 2008 from the University of California-Davis. Her academic focus is on Southern culture and African-American literature, and as an artist, her quilt work is part of a long Southern tradition.

Her quilts have been exhibited at the Rosa Parks Library and Museum in her hometown, and she is profiled in the book "Crafted Lives: Stories and Studies of African American Quilters."

A short film, "Riché Richardson: Portrait of the Artist," by Géraldine Chouard and Anne Crémieux, was shown in Paris at the ambassador's residence, where she also gave a talk on Montgomery modernism for an audience of scholars, students and French and American quilters.