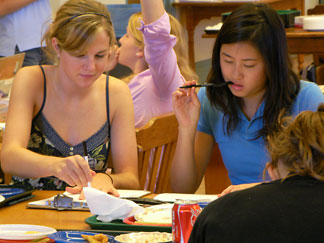 Provided
In a study on how a terrorist food scare would affect consumers, study volunteers eat at a buffet lunch and fill out a questionnaire.

People at a lunch buffet learned that the chicken being served might be tainted by bird flu. So they ate less of it. But they ate even less when they were told that the sinister force of terrorism was behind the flu threat. Even so, in both cases, they still ate some chicken.

A study by Cornell researchers, to be published in a forthcoming issue of the Journal of Agricultural and Resource Economics, provides insight into how use of the food supply by terrorists might affect consumers and food markets.

"Policymakers have been using naturally occurring outbreaks of food- borne illnesses to assess the potential impacts of terrorism on the food supply," said first author David R. Just, associate professor of applied economics and management in Cornell's College of Agriculture and Life Sciences. "Our research -- one of the first experimental studies to investigate how food safety concerns influence the consumption of immediately available food to hungry individuals -- suggests the impacts might be substantially larger."

Just and his two Cornell co-authors -- Brian Wansink, the John S. Dyson Professor of Marketing, and Calum G. Turvey, the W.I. Myers Professor of Agricultural Finance --argue that their use of an experimental psychology method involving deception "is essential" in studies of behavior in food safety because "hypothetical scenarios and surveys do not capture the emotional nature of the response."

Although deceiving study volunteers is common in psychological experiments, the practice is largely unacceptable in economic studies, said Just. Their report argues that using deception is justified when studying the potential effects of terrorism on the food system.

When the volunteers believed that the outbreak was naturally occurring, they ate 17 percent less chicken than the control group; if they thought terrorism was involved, they ate 26 percent less. Only a handful of the 103 volunteers chose to eat no chicken at all.

The study shows, Just said, that people respond much more severely when they fear that terrorists are behind the tainted food.

The study was supported by the Cooperative State Research, Education and Extension Service of the United States Department of Agriculture.