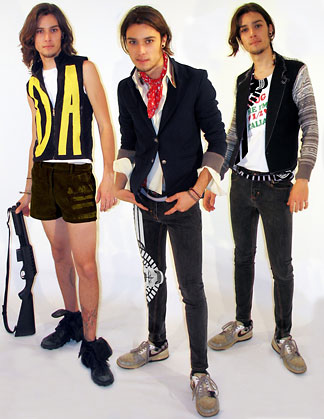 Provided
A model shows off three fashion looks for young men created by Heber Sanchez '09, who won a $25,000 scholarship for his designs that consist of dismantled, used clothing from the Salvation Army that is combined with organic textiles.

The fashion line -- called Danger Ahead -- was made from garments that were purchased at a Salvation Army store and then dismantled and combined with organic textiles to create new styles.

"I didn't want to make this just about selling used clothes to people and making them think they were new," explained Sanchez, a fiber science and apparel design (FSAD) major. "When you think sustainable, you think homey or hippie. I didn't want that. I wanted the clothes to be well-designed and fashionable."

"Before, I never really thought about sustainability," he said. "Usually, I bought the most amazing fabric I could afford for my creations."

Sanchez came to Cornell from El Salvador as a pre-med major, but he transferred into FSAD during his freshman year.

"I took summer classes through the prefreshman summer program, and by the time that was over, I knew didn't want to become a doctor," he said. Sanchez said he has always loved clothes. He got his first sewing machine when he was 12 years old and used to make dresses for his sister's dolls.

Sanchez hopes to use his new scholarship to attend graduate school in design in London.

Sheri Hall is assistant communications director for the College of Human Ecology.