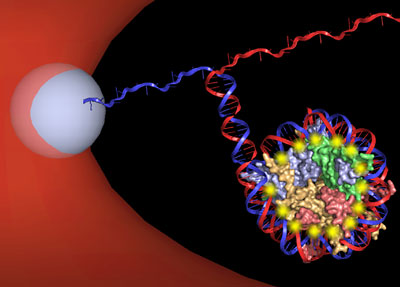 Michael Hall
A DNA molecule containing a nucleosome is unzipped using a microsphere held in an optical trap, allowing precise mapping of histone-DNA interactions within the nucleosome. Yellow dots indicate the locations of strong interactions, determined to near-base pair accuracy.

Anyone who has ever battled a stuck zipper knows it's a good idea to see what's stuck, where and how badly -- and then to pull hard.

A Cornell research team's experiments involve the "unzipping" of single DNA molecules. By mapping the hiccups, stoppages and forces along the way, they have gained new insight into how genes are packed and expressed within cells.

DNA, the molecules that contain genetic information, are nucleic acids often illustrated as long, thin strands of double helices. DNA fits inside cell nuclei by being wound like thread around proteins called histones, forming tightly packed bundles called nucleosomes. But that same DNA must often be uncoiled and accessed by such enzymes as RNA polymerase, which the researchers liken to a motor because it moves along the DNA in the process of gene transcription.

"There is this paradox," Lis explained. "On one hand you need compaction and the packing away of DNA. On the other hand, you need accessibility, so the cellular machines can read the information contained in the DNA."

Trying to understand what happens during that unwrapping process is at the heart of this research team's efforts. By unzipping each DNA double helix through a nucleosome using an optical trap -- a technique developed in Wang's lab -- they unwrapped strands of DNA from their histone cores, observing, with near-base pair accuracy, the interactions that took place along the way.

Optical trapping involves a focused beam of light that can "trap" small objects. A refractive sphere is chemically attached to the DNA strand, and the optical trap moves the sphere, allowing the researchers to unzip the DNA strands apart by pulling, Hall explained. By doing so, the researchers re-created what happens in the cell when DNA uncoils from the histone core, and they measured the blips along the way -- for example, when the DNA strand had to be pulled apart from a protein molecule -- and how much force was needed to keep going.

"It's really like a zipper," Hall said. "And when there is a protein in there, it's kind of like you have a piece of cloth stuck. You know you can get it out, but you just have to pull harder, and then it pops out. That's basically the same way we can detect where the interactions are with the proteins."

The researchers have performed the first direct, precise measurements of histone-DNA interactions. Their findings could help uncover how changes to the histones or DNA sequences affect how motor proteins access genetic information in cells.

"If we have that knowledge, we can extrapolate that information to apply to different scenarios and different motor motions," Wang said.