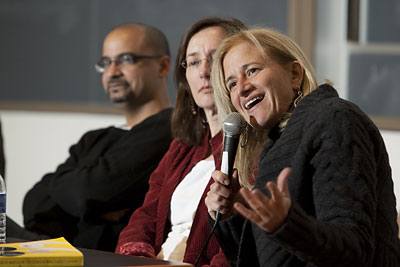 "These writers once sat where you're sitting, in the audience, wondering how to end up sitting here talking about their successful lives as writers," moderator J. Robert Lennon, assistant professor of creative writing, told students during his introduction to the novelists' panel discussion, "Flash Forward: Cornell Writers Return."

Following her father's advice to be a secretary, Schumacher said she worked as a typist for a gynecological journal in New York City before coming to Cornell for graduate school.

"It was like the hand of God reached down and took me out of that life I was leading and brought me here," she said.

Schumacher's work -- including the novels "The Body Is Water" and "Black Box" -- has been translated into multiple languages, and her short fiction has appeared in "The Best American Short Stories 1983" and "The O. Henry Awards."

Schumacher revealed that her early writing was an outlet -- her family "didn't talk about emotions, we didn't talk about our inner selves, and so that's what I do on paper." The focus and support of the writing program changed her life, she said, by fortifying her passion and instilling a sense of discipline.

Díaz agreed, referring to his time on campus as a "three-year holiday" and a "get out of jail free card." Cornell offered him a refuge from his mind-numbing jobs. "At that time, it was two to four years basically writing, being around a bunch of writer nerds," he said.

Born in the Dominican Republic and raised in New Jersey, Díaz has made the cultures of both locations prominent in his work. He wrote most of the short stories in his first collection, "Drown," while at Cornell.

He emphasized that the M.F.A. program was "a stupendous, bold-lined privilege" -- but he joked that "it's almost a passport to grouse. … We complained about what we didn't have as a way to obscure the enormous privilege of what we did have."

Bank, author of the best-selling "The Girls' Guide to Hunting and Fishing," said her writing "started like any compulsion -- smoking, drinking, eating; then it's hard to stop."

As she became comfortable and perfected her craft, she described feeling empowered to create and destroy with her pen. "Once you start seeing what you could do, you feel like you could be smarter, funnier and better on paper than you could ever be in life," she said.

When she was at Cornell, she admitted, "I didn't really understand how huge a gift it is to be able to think about nothing except your own writing and the other writers you admire."

Bank has published stories in periodicals ranging from Cosmopolitan to Epoch, the Cornell literary journal. She is teaching at Cornell this semester as a visiting writer.

Díaz said being in a writing program provided valuable lessons in other authors' stylistic and narrative strategies, gleaned from their own years of reading. "Your peers' successful strategies as an artist are things always, always to emulate," he advised students.

He also urged student writers to look beyond present accolades and to focus on continual growth and learning.

The afternoon panel and an evening reading by the three writers were the first events in a yearlong celebration of 105 years of creative writing at Cornell.

Laura Janka '09 is a writer intern at the Cornell Chronicle.