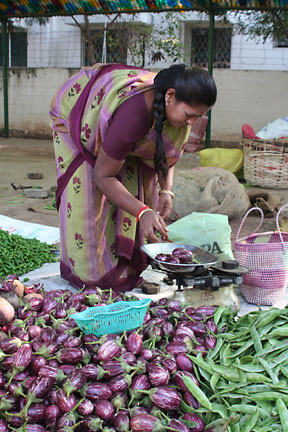 Krishna Ramanujan/Cornell Chronicle
Revadhi farms seven acres of land outside of Coimbatore and sells her produce at a farmers' market in the city.

Cornell Chronicle writer Krishna Ramanujan traveled to India last month as part of the College of Agriculture and Life Sciences field course International Agriculture and Rural Development 602, which seeks to acquaint students with major issues and problems in international agriculture and rural development. This is the second of five articles from that trip.

At a farmer's market in the southern Indian city of Coimbatore, a farmer named Govindaraju sat before a pile of eggplants riddled with small holes. He said the natural insecticide he used, made from cow dung and urine, offered only limited protection against fruit and shoot borers that infest his crop. Nearby, another farmer, Revadhi, had few of the tell-tale brown holes in her small eggplants, but she had sprayed them with harmful chemical pesticides twice a week.

Small farmers in India will soon have a cheaper, safer and more effective option for growing one of India's favorite foods: genetically modified eggplant, developed with Cornell's help, which continually expresses a naturally occurring insecticide derived from the bacterium Bacillus thuringiensis (Bt).

"The Bt eggplant will be the first genetically modified food crop to be released in the whole of South Asia," said K.V. Raman, Cornell professor of plant breeding. "The impacts could be really dramatic."

The life cycle of the fruit and shoot borer Leucinodes orbonalis provides only a two- to three-hour window for farmers to spray and kill the insect's larvae after hatching and before the larvae bore into the eggplant. With such fleeting opportunities, farmers spray every few days, as much as 50 times per crop, driving up costs, contaminating produce and creating health issues for farmers.

Based on field trials, the yield of the Bt eggplant is expected to be twice that of other varieties and will need 30 percent less pesticide; some insecticides will still be necessary for other pests.

Since 2002 the Cornell-run Agricultural Biotechnology Support Project (ABSP) II and Sathguru Management Consultants, Cornell's partner in India, have worked with Indian public and private institutions to develop the eggplant. ABSPII is funded by the U.S. Agency for International Development, which is interested in promoting agricultural biotechnology in developing countries.

Cornell and Sathguru convinced Maharashtra Hybrid Seed Co. (MAHYCO), a seed company that is one-quarter owned by the agricultural giant Monsanto, to donate parent plants of the Bt eggplant to Tamil Nadu Agricultural University (TNAU) in Coimbatore, the University of Agricultural Sciences in Dharwad and the Indian Institute of Vegetable Research in Varanasi, to breed genetically modified local varieties. Parent plants were also similarly donated to institutions in the Philippines and Bangladesh.

MAHYCO conducted field safety tests on the plants' growth, Bt spread, effects of Bt on human health, allergenicity and effects on such beneficial insects as honeybees; they submitted their findings to the Indian government last year.

Then, TNAU researchers crossed popular local varieties of eggplant with the parent Bt plants from MAHYCO. They then "back-crossed" the offspring -- taking the most resistant and productive progeny of those crosses and crossing them again with local varieties. After three such "back-crosses," they created plants that have the Bt gene and contain 99 percent of the local varieties' genetic material.

Advanced lines of the local Bt eggplants are now ready in greenhouses at TNAU awaiting final federal approval. Once that happens, which could be anytime, the public sector will sell seeds at cost-recovery prices (i.e., at no profit) to small famers for open-pollinated local varieties, whose seeds can be saved and planted year after year, making the new technology accessible to poor farmers. Concurrently, MAHYCO will sell to larger farms hybrid Bt eggplant seeds that have higher yields but must be purchased each year.

"It was obvious that Bt eggplant eventually was going to be available as a hybrid, so we wanted to create open-pollinated varieties aimed toward benefiting low-income farmers," said Ronnie Coffman, international professor of plant breeding and director of International Programs in Cornell's College of Agriculture and Life Sciences.

"A substantial portion of the farmer's income goes to protect against this borer," added P. Balasubramaniam, director of the Centre for Plant Molecular Biology at TNAU. "I hope farmers will welcome this product with an open mind."

Once the government gives its approval, Indian university researchers and others expect that up to six months will be needed to produce, bag and label the seeds. They are training 40 extension professionals to offer informational workshops and outreach to vegetable farmers. A database will track seeds from production to farmers, so public suppliers can account for every seed. There are also plans to use post offices as central seed distribution points, and local cooperative groups, mostly composed of women who are well-connected to their farming communities, to help facilitate getting seeds in farmers' hands.