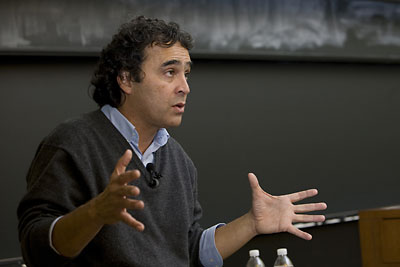 As candidate for mayor of Medellín, Colombia, Sergio Fajardo took long walks around town, stopping to speak with people at schools, on soccer fields and at street corners. He sought to win the people's trust and to transform the violence-ridden city.

In 2003 Fajardo was elected mayor of Medellín. An active narcotics trade along with the demise of traditional manufacturing had rendered the city poor and dangerous. It seemed as though violence had torn the fabric of the community, destroying all hope for education and equality.

But as Fajardo told his Cornell listeners on campus Feb. 19, "We had to destroy the walls that separated us." He entered office vigorous and hopeful, vowing to reduce violence and to turn fear into hope. He left office in 2007 with a greatly improved city and an 89 percent reduction in the annual murder rate. Now Fajardo is a presidential hopeful in the 2010 Colombian national elections.

Fajardo, who earned a Ph.D. in mathematics from the University of Wisconsin-Madison in 1984, displayed a map of Medellín illustrating the city's social and economic inequalities. His goal, he said, was to erase those differences. He and his team worked directly with the Colombian police force to reduce violence and engage roughly 4,000 young people in training programs, so they would become "youth with a future."

Despite controversy, the plan worked confirming Fajardo's conviction that "education is the engine for social transformation." The second part of Fajardo's plan for transforming Medellín was to use architecture to "give the best of society to the poorest people." Fajardo hired Colombian architects to build "library parks," entrepreneurship centers and science museums in the most troubled sections of the city.

He increased the municipal budget for education, building new schools and renovating old ones. According to Fajardo, the new schools instilled hope and self-esteem in students and their families. "The quality of education," he said, "begins with the quality of the space."

"We want to show that [Medellín] is a new city," said civil engineering graduate student Natalia Romero after the talk.

Electrical engineering graduate student Eliana Nossa, who is from Colombia's capital city, Bogotá, said she hoped Cornell students would feel a connection to Fajardo because of his time in academia. "He was a student, too," said Nossa. "We could make the same types of changes that he did."

The event was co-sponsored by various campus organizations, including the Cornell Latin American Studies Program, the Cornell Institute for Public Affairs, the Law School and the Colombian Student Association.

Jill McCoy '09 is a writer intern at the Cornell Chronicle.