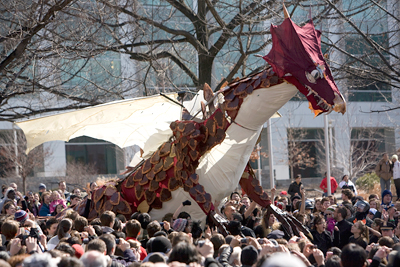 Jason Koski/University Photography
The 2009 Dragon, designed by Kyle Schumann '13, is surrounded by students on the Arts Quad. 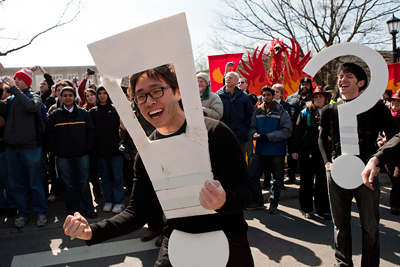 Cornell's 108th annual Dragon Day on March 13 featured the usual excitement -- toilet paper in the trees, a parade through campus and a ritual burning. Except that this year the dragon itself survived.

Due to New York State Department of Environmental Conservation regulations now in effect, open burning is restricted to wood and agricultural products. That means no combustible dragons.

Following a parade to the Arts Quad, the burning dilemma was solved by students who built a nest of lumber and hay and a large dragon's egg, which they then set alight. The dragon, a maroon monster built on a lean, lightweight structure of steel rods and chicken wire topped with cardboard and fabric, was moved well away from the bonfire and later returned to Rand Hall.

Designed by Kyle Schumann '13, the dragon was the culmination of many hours of work by first-year architecture students. The phoenix, which as tradition demands challenged the dragon on its route, was created by a group of engineering students.

Rachel Tan '13 said that a construction crew of at least 15 to 20 students, "plus people in and out all the time," worked on the dragon almost nonstop up to the final minutes.

Dozens of costumed student revelers -- in outfits including orange highway cones, the bunny from "Donnie Darko," and a lithe reptilian figure in head-to-toe green Spandex -- assembled along University Avenue behind the College of Architecture, Art and Planning while the dragon was readied for its entrance.

For effect, Schumann's design featured moving wings, head and claws. "They had a lot of effects, but they didn't use the effects until they met the phoenix," Dragon Day adviser and Rand Hall shop manager Brian Beeners said.

The Phoenix Society, with a core group of 13 engineering students and a $400 budget funded by the Risley Kommittee and the Engineering Student Council, prepared the red phoenix complete with an array of fabric flames for the beast's rise.

"We've been meeting since fall, and we've been at it an average of seven hours a day for more than a week, including an all-nighter," said Alyssa Henning '11.

"It went really well. I had the least involvement I've had in my 21 years [supervising Dragon Day construction]," Beeners said. "They took charge. They divided themselves into groups with different responsibilities -- like selling T-shirts -- and they had one designer. I had to do a little tweaking, but it was a very good design. They also had a lot of experience in the shop with their classes this year. I couldn't be happier with this group."