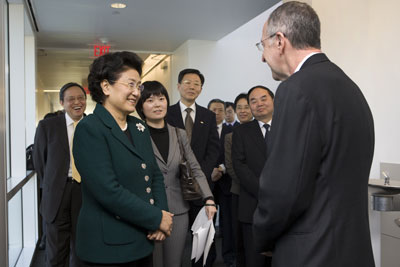 After years of careful stewardship by Cornell scientists, a collection of more than 2,000 species of native Chinese fungi, spirited out of the country for safety before World War II, is finally set to make its way home.

On April 13, a delegation of Chinese government officials, led by State Councilor Liu Yandong, visited campus to begin the process of repatriating the fungi to China. The specimens are not only a reminder of China's biodiversity, but also of the legacy of S.C. Teng, a Cornell student-turned- pioneering-scientist who risked his life during war to keep the fungi safe.

At a ceremony in Weill Hall, President David Skorton presented Liu with a letter of intent explaining Cornell's lengthy efforts to return the fungi.

"The fungi will be carefully prepared and documented in coming months, so we can accomplish the safe repatriation of this important collection on my next visit to Beijing at a mutually agreed upon time," Skorton said.

Liu, a high-ranking politician in the People's Republic of China and a member of its Political Bureau, called Cornell's efforts "a demonstration of the friendship of your university toward the Chinese people."

She and Skorton elaborated on Cornell's many connections with China over several decades. Liu, whose father-in-law received his Ph.D. from Cornell in 1937, described how he had traveled for 15 days in 1934 to get to campus and begin his studies.

"The shepherd boy realized his dream of becoming a Ph.D.," Liu said.

In a gift exchange at the end of the ceremony, Skorton presented Liu with a bound copy of her father-in-law's dissertation, published in 1937 on the agriculture of cotton. The Chinese delegation gave Skorton an ornately carved box. 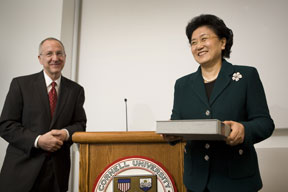 Jason Koski/University Photography
Liu Yandong reacts to a gift from President Skorton, a copy of her father-in-law's dissertation, during the fungi repatriation ceremony. 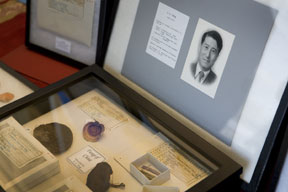 Jason Koski/University Photography
An exhibit set up in Weill Hall shows specimens from Cornell's Chinese fungi collection and a picture of S.C. Teng, the Cornell graduate student and scientist who shipped 2,000 specimens to Cornell for safekeeping in 1940.

Liu and other delegates from the Chinese government, including the Ministry of Education and the Ministry of Science and Technology, spent the day touring the campus and meeting with Cornell leaders, including Susan Henry, dean of the College of Agriculture and Life Sciences, and Stephen Kresovich, vice provost for life sciences.

Cornell's Plant Pathology Herbarium has been home to the fungi for nearly 70 years. During the 1920s, Cornell mycology graduate student Teng left Cornell for China before completing his Ph.D. to conduct pioneering biological surveys by horseback. He, along with others, collected and classified thousands of fungi in their native China.

After the Japanese invaded China in 1937, Teng shipped 2,000 specimens to safety at Cornell in 1940, where they remain today. The specimens that remained in China were destroyed during World War II.

"The specimens are impressive in themselves, but more so due to their poignant history and the personal sacrifices made by Mr. Teng and his family to save them from destruction," said Skorton during his remarks.

According to a 2005 Plant Pathology Newsletter article by Kathie Hodge, assistant professor of mycology and director of the Plant Pathology Herbarium, Teng and his family members were persecuted and tortured during China's Cultural Revolution, which began in 1966 and lasted for a decade, and many of Teng's unpublished manuscripts were destroyed.

After his death in 1970, Teng's family recovered the manuscript of his greatest work in progress -- a book on the fungi of China. His daughter, Rosalie Deng, worked with Richard P. Korf, professor emeritus of mycology and director emeritus of the Plant Pathology Herbarium, to complete the book, which was published in 1996. It was the very collection of fungi specimens that Teng originally sent to Cornell that vouched for much of the work described in the book, according to Hodge's article.

Cornell's collection includes many types of specimens -- the first of their kind to be collected and scientifically identified as representatives of their species.

"These specimens are invaluable for Chinese mycologists to have available so they can document their own current flora and gain some insight into what conditions were at the time they were collected," Korf explained. "Many of these collection areas no longer exist in China."